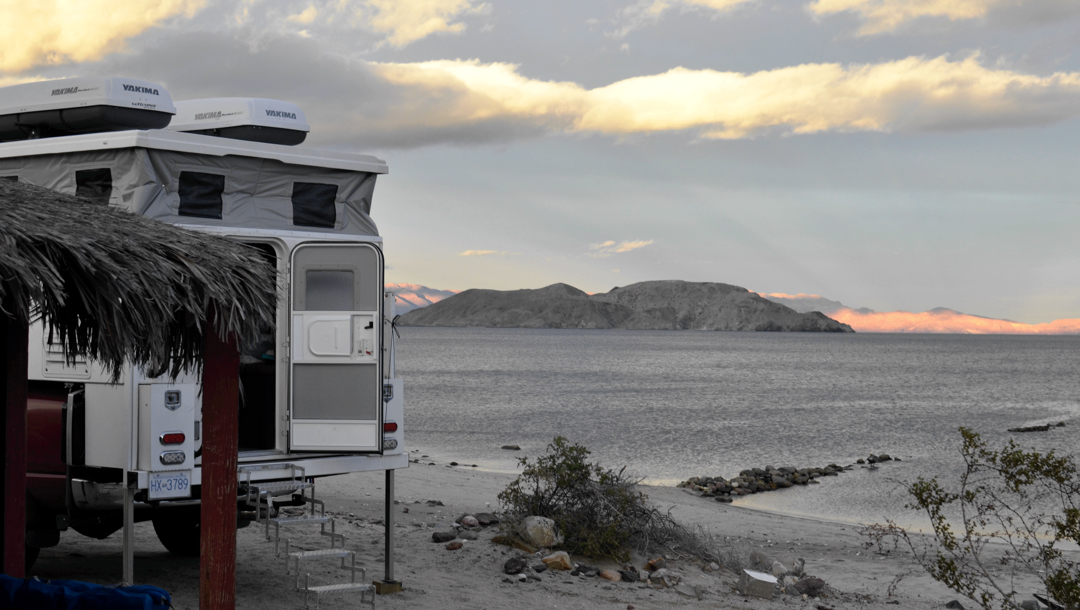 We loved being in San Felipe, but the weather reports were calling for rain, and we thought we’d hit the road instead of staying indoors in gloomy weather while we could be driving to a new adventure.  We decided to hug the eastern coast of Baja, and stick with the Sea of Cortez and magnificent sunrises. 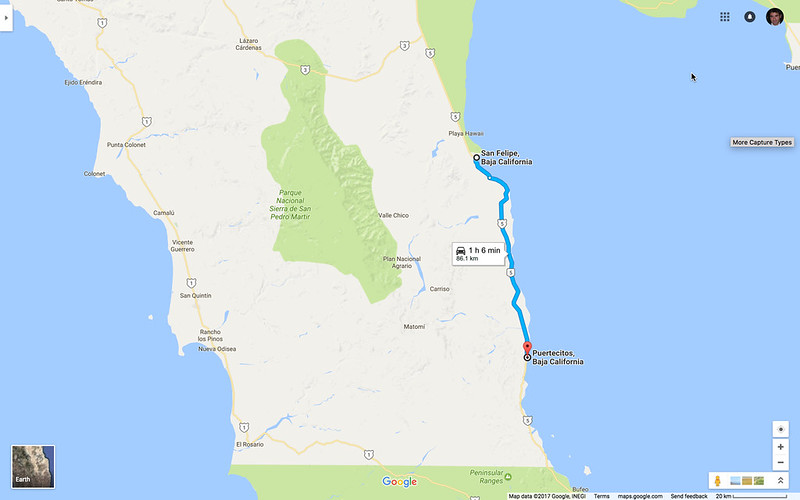 Our next stop was Puertecitos, a very small town with one main attraction…a natural hot springs. We were the only ones at the tiny cove when we arrived at mid-day.  We couldn’t help but wonder why we didn’t see at least some fisherman about, because there were fish jumping out of the water all over the small cove.  Sometimes you could see 4 or 5 in the air at the same time.  It was as if the water were hot and they were trying to escape.  Okan fished for a while, but only the Pelicans were having luck at catching them. 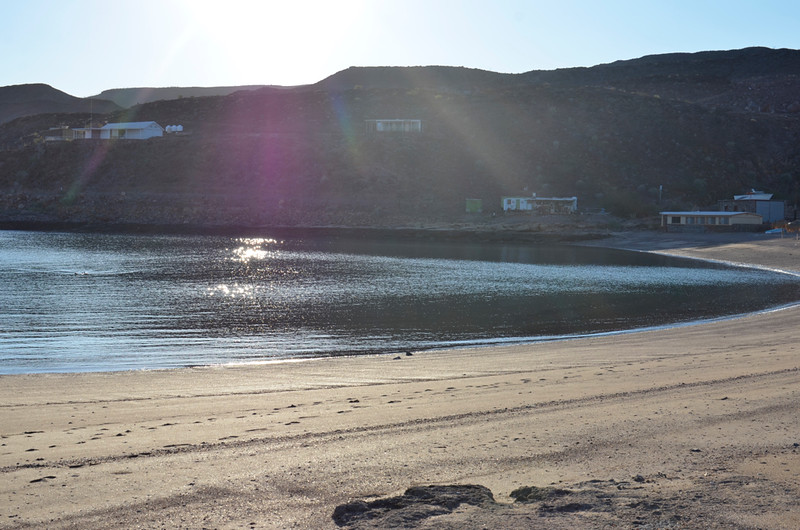 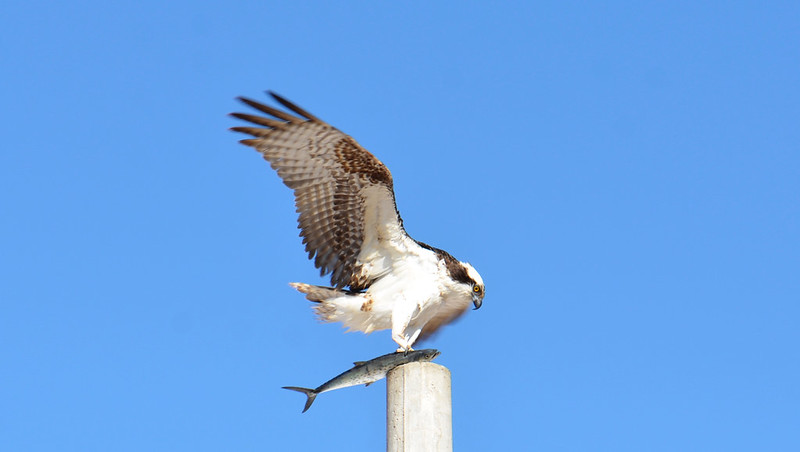 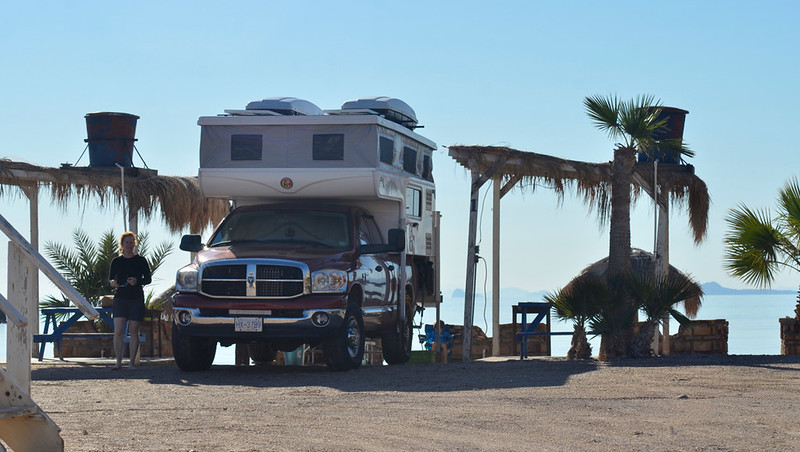 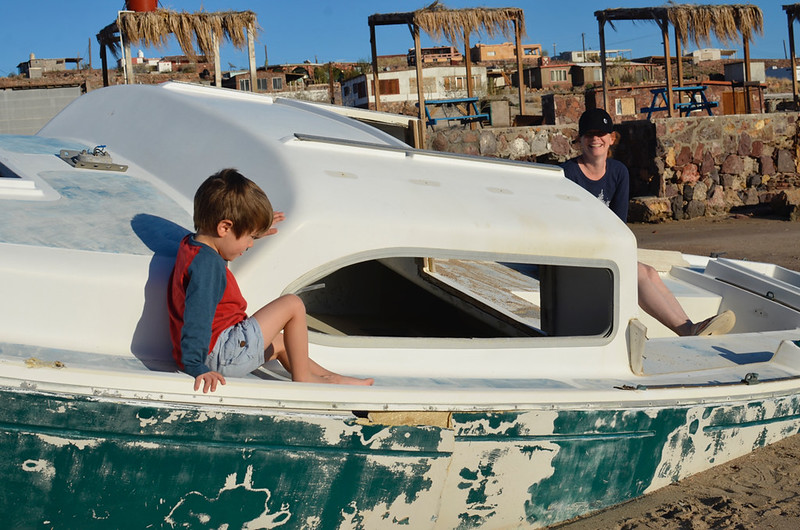 Aside from one boat wreck on the beach, there wasn’t anything around, which made me intent on experiencing the hot springs at its fullest, at low tide when all three tide pools would be accessible.  I incorrectly thought it the tide was coming in when we arrived, and was distressed thinking we’d have to wait until midday the following day, which would delay our drive to the next destination.  When we awoke to a muddy field I was happy to realize I was very wrong about low tide, and we could have an early morning dip, and have enough time for our drive.  Several motorcyclists from Oregon and a couple from Ohio joined us in the hot springs and we swapped travel stories while alternating between the hottest area in the coolest of the 3 tide pools.  I realized I didn’t need to worry about seeing the pools at low or high tide, because I could only handle the temperature of the pool closest to the sea, and never made it to the two hotter pools! 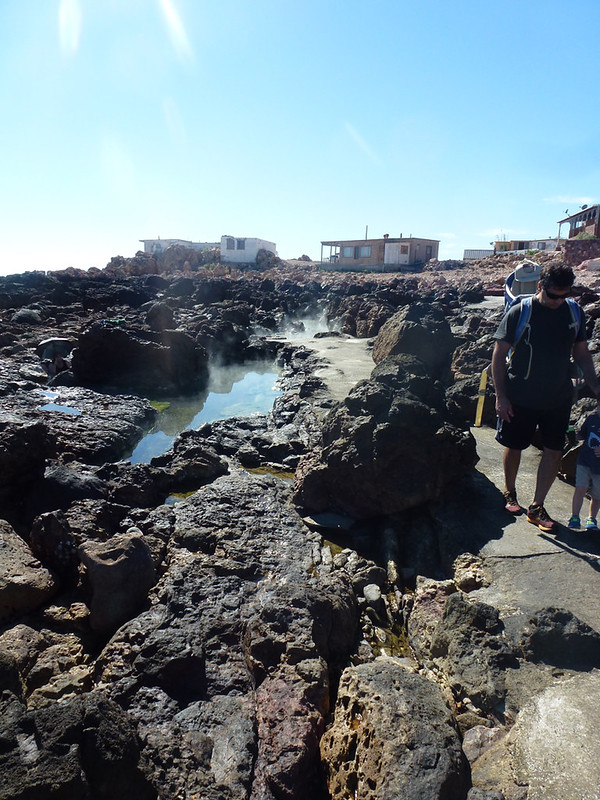 After our soak, we headed to Gonzaga Bay…and drove on our first of what would be many washboard roads.  Nothing like a bumpy road to remind you that you need to lose a few jiggly pounds!  Gonzaga Bay Camping was very remote, mainly for fisherman, and again we were the only people at the campsite. 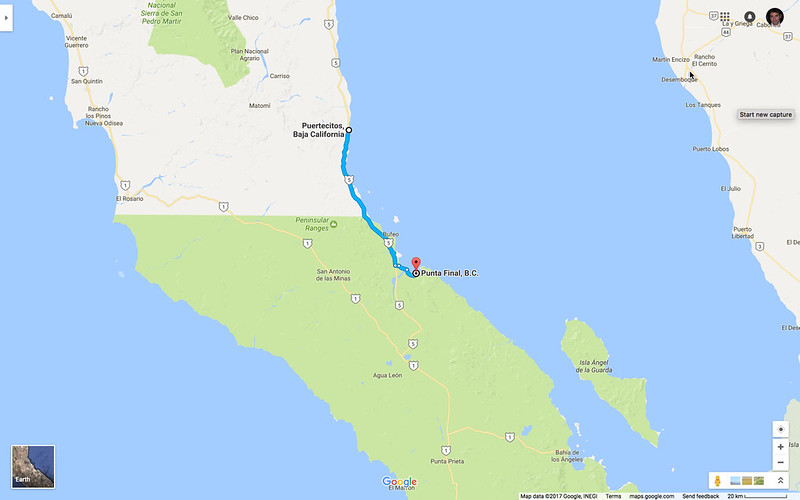 We stayed at Camp Baluga, run by a nice family who popped in to make sure we were settled.  We enjoyed a magnificent fire, almost a bonfire, since we had the whole day to gather any and all wood in the area.  But the highlight was staring at the endless stars late into the night…at least until 9:00pm!  Indigo learned about Orion’s Belt, the big dipper, and of course fell in love with fire-making. 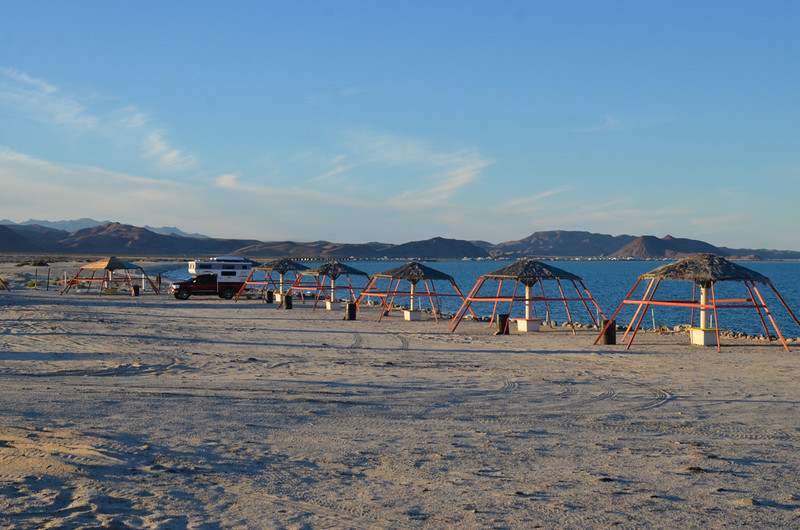 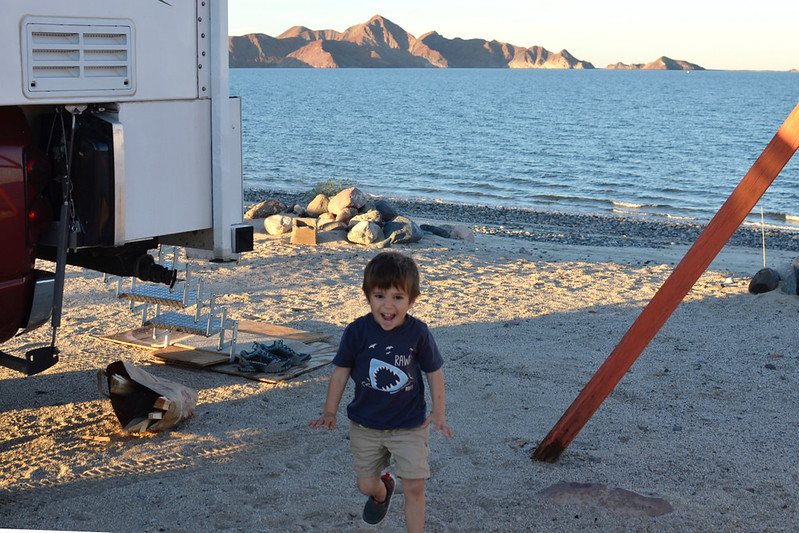 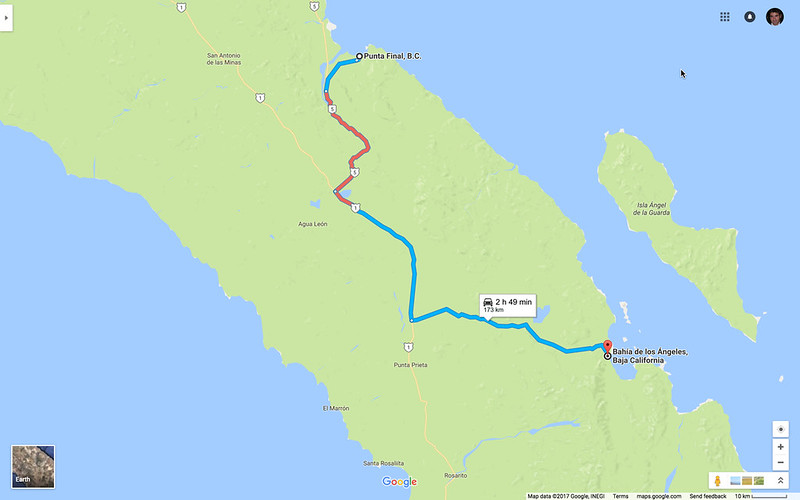 The road between Gonzaga Bay and our next stop in Bahia de Los Angeles was the most grueling drive.  The highway is not finished and we criss-crossed back and forth across the “soon-to-be-built” highway in the making.  Okan had to pressure down the tires to 25 psi and the next 40 miles (in red above) took us 2 hours to drive  We wanted to kiss the “smooth road”, as Indigo says, when we finally met up with Mex 1 again. 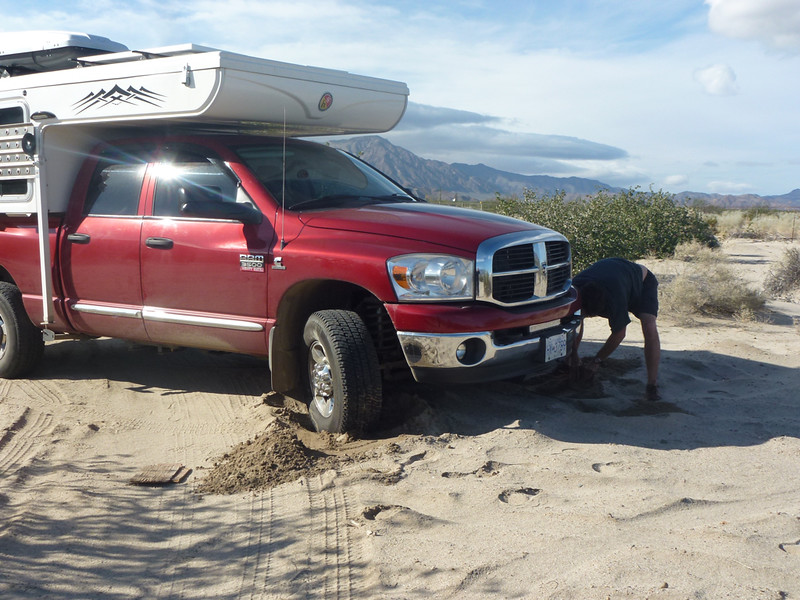 We took a wrong turn on the way to our next campground, and got stuck in soft sand when trying to turn around.  I wanted to break out our fancy sand ladders, but Okan managed to get us out with some boards he found strewn about and engaging Machete’s 4 wheel drive. Maybe next time! 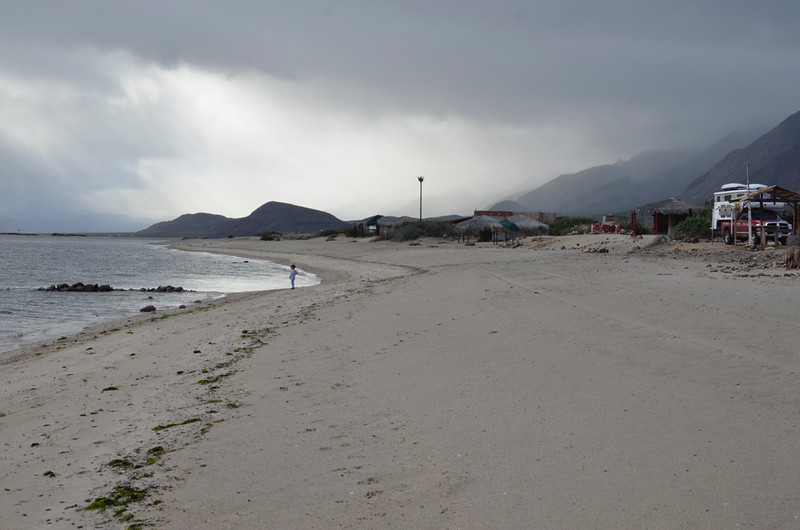 We chose Camp Archelon in Bahia de Los Angeles because it was the most scenic campground, and we liked that it had the only recycling in the area.  We were surprised to roll into a fully packed campground, with only one palapa next to the fish-cutting stand available.  The weather was still gloomy, but we loved the feel of the beach, and the view of the islands across the bay.

There was no wifi at the campground, with no intention to provide it in the near future.  Apparently there have been debates on a way to bring connectivity that won’t destroy the environmentally friendly vibe and goals of the campground.  We actually loved not having the internet available, as this campground attracts people that seem most comfortable while unplugged and getting to know their neighbours.  We were invited to a get-together with the other campers that evening, who just met each other that week, and who all just happened to play music. We enjoyed a great jam session to which Indigo proudly brought his own ukulele, but was to shy to actually play.  Indigo particular became fond of Bob, who he kept busy on the beach earlier in the day playing freeze tag. The fact that Bob played the Harmonica at the jam session just further endeared Indigo to him.

It was also nice getting to know the owner Antonio, who took returned home to run the campground with his mother when his father died the previous year.  Antony is well traveled, well educated, and has great perspectives on his country and people, as it relates to the greater picture.  We wish him much success.

Antonio has several sweet dogs, and they became particularly fond of Indigo.  The Belgium Shepard puppy was so excited every time he saw Indigo run (someone his size perhaps?), he would immediately jump and knock him down and start licking him. This resulted in screams of help help, and we must have rescued Indigo at least 6 times.  Even the older pug got in on the action and managed to knock him down once.  Indigo must be just so lickable! 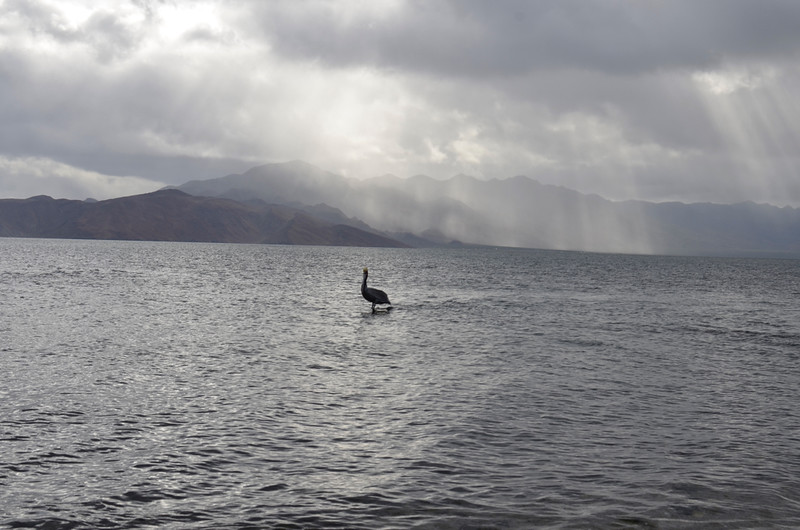 While here, my fascination with Pelicans continued to grow, and I walked up and down the beach pestering two Pelicans to please hold still and pose for me.  I never thought to notice Pelicans before, and now I will stop in my tracks to watch one sweep low across the water, rise quickly and quietly into the air, then deftly plummet into the sea like a missile. 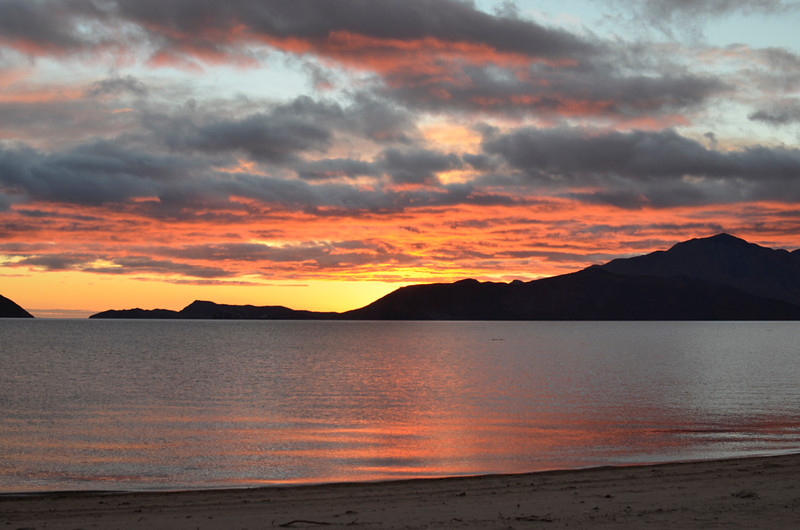 We made the decision to leave this great beach, with its amazing sunsets and numerous pods of dolphins swimming by, because yet another new storm was approaching.  The rest of our neighbours had already headed south in search of warmer weather, and we hoped to find it too.