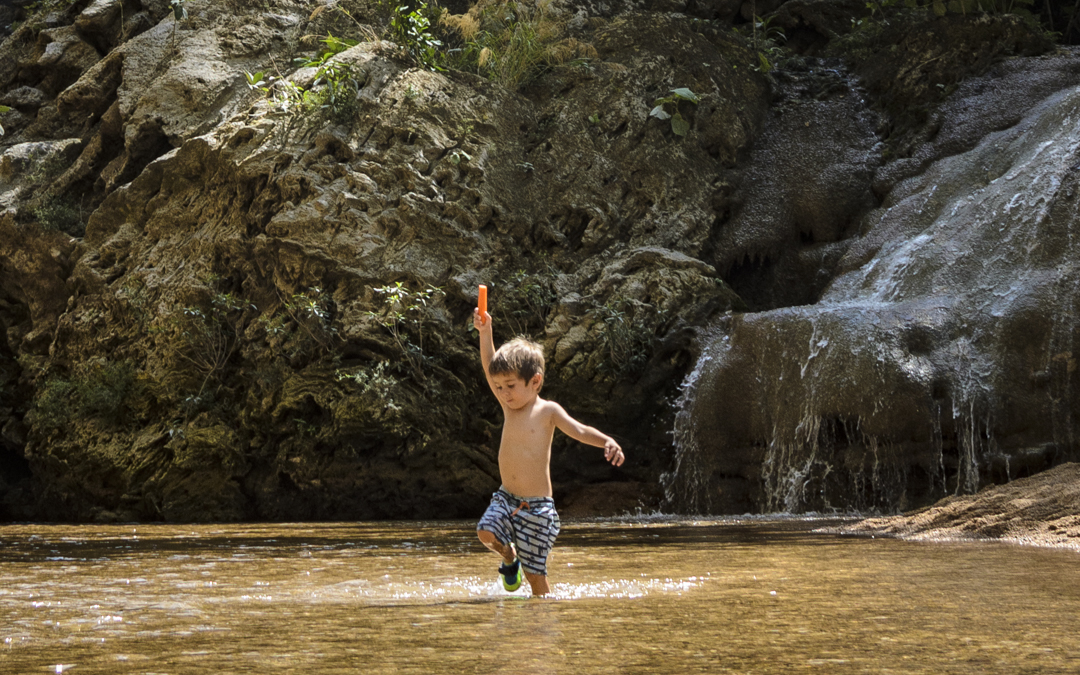 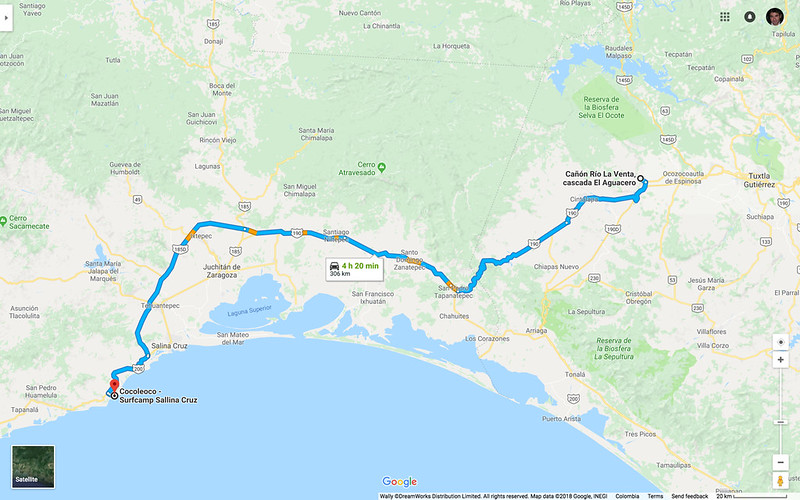 As we left the coast, we were curious what inland Mexico would look and feel like once again.  We were in route to Cañón Río La Venta, to see the waterfall Cascada El Aguacero. We were a bit skeptical about the logistics because there are no camping places nearby and the only option seemed to be the parking lot of the waterfall itself.  We stayed in only one parking lot on our trip thus far, and we’re still a little anxious about how it would play out…you know, how would the bathroom situation be :).  Once we took the turn-off to the waterfall, the road became extremely narrow and treacherously steep in places, just two strips of cement leading down a grass and dirt filled track.  Not since the road to Agua Verde was I so nervous about encountering a car coming the opposite direction, as surely one of us would simply need to fall off the side of the cliff.   Turns out tour busses frequent this road and lookouts are discreetly (I assume so, because I didn’t see them) located along the road with walkie talkies letting the folks in the lot below know that cars are coming.  Would have been splendid for my nerves had I known that in advance of committing to the road downward.

The parking lot was simply a clearing of tall, but smashed down, dry grasses, packed with cars and loud with the chatter of many groups when we arrived. We struggled to find an open spot for the truck thinking we’d move it when the crowds left.  In a couple of hours the cars started leaving, and the sound of hundreds of people was replaced by the even louder sound of crickets. The crickets were the loudest I’d ever heard, and I gladly removed my hearing aids too dampen the constant chirping echoing off the canyon walls. Good news was that the bathroom situation was quite good, with a clean unlocked bathroom at the end of the parking area, and we never bothered to re-position the truck. 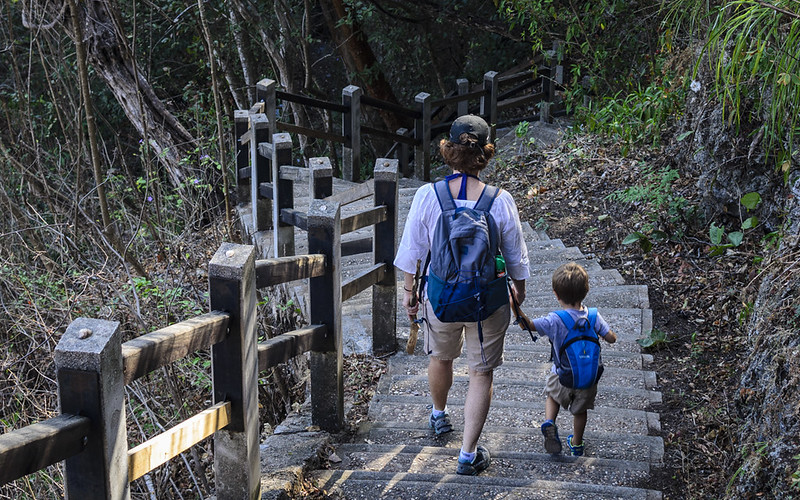 Early the next morning we made our way down the stairs to find a breathtaking valley. With every direction we turned oohs and aahs escaped our mouths. 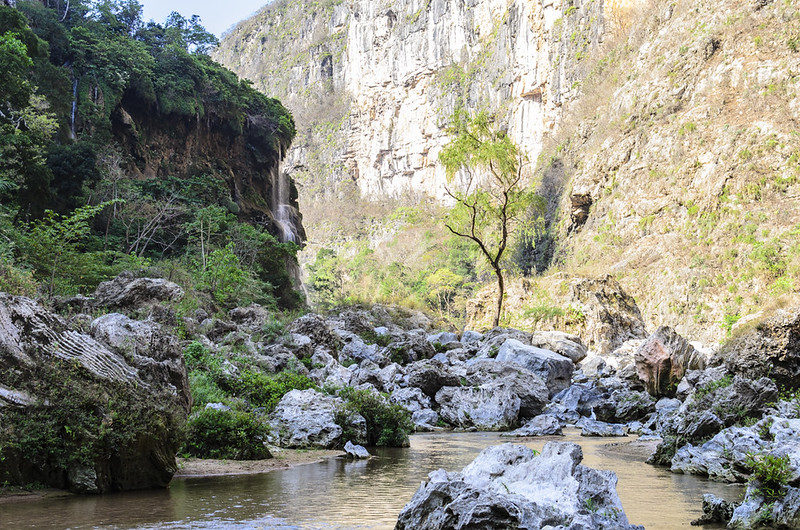 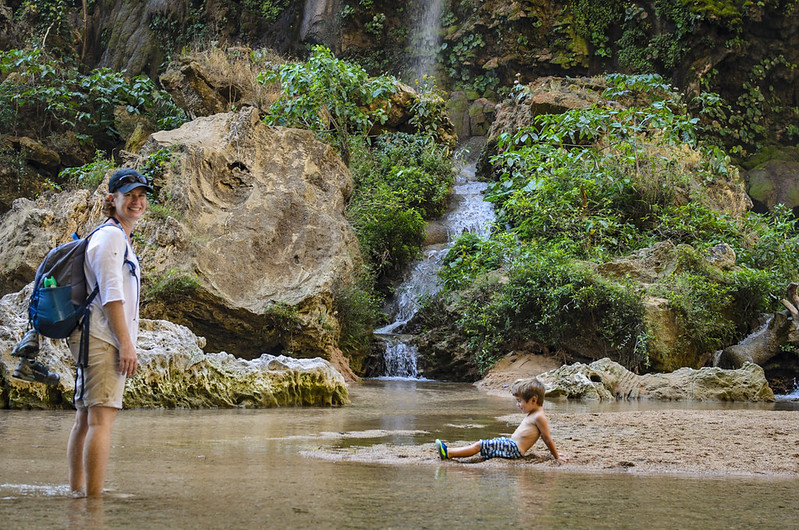 Every step up the river bed was full of great places to stop and play, making us wonder if we’d ever reach the “big” waterfall.  Well, we certainly found it!  We took turns venturing under the massive spray, and Okan decided to take the GoPro directly under the water, and got smashed pretty hard by the downpour on his back. Indigo took little interest in the waterfall as there were perfect Indigo-sized swimming holes all throughout the area. 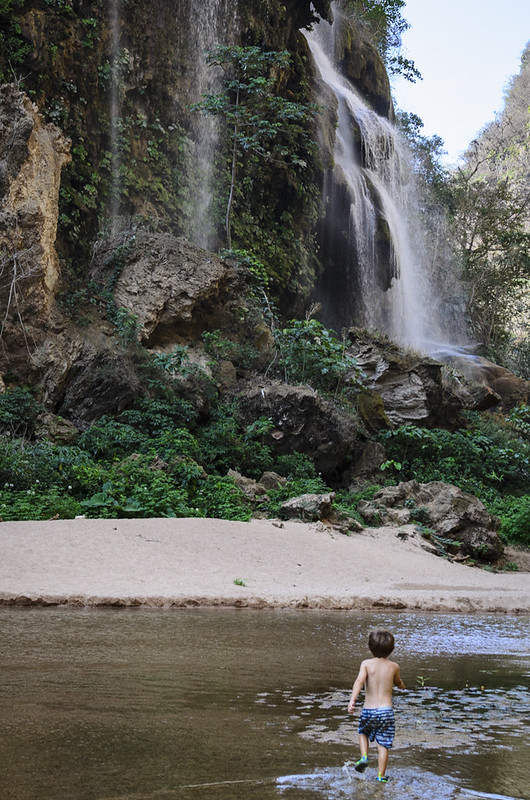 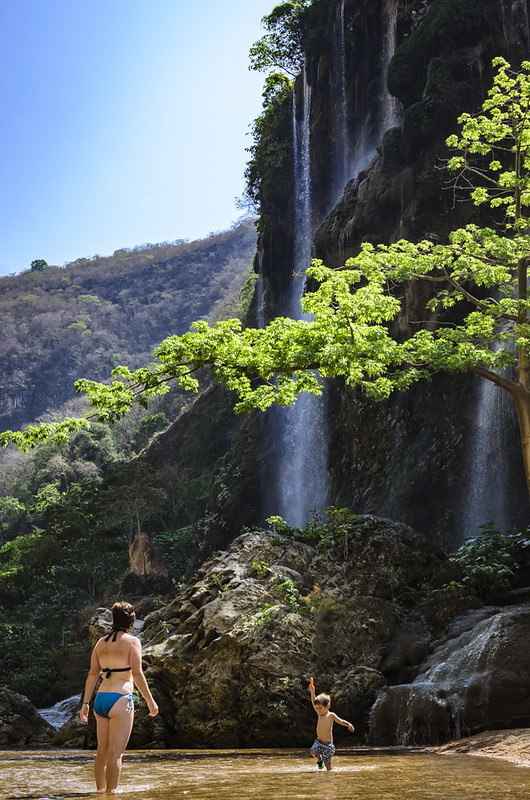 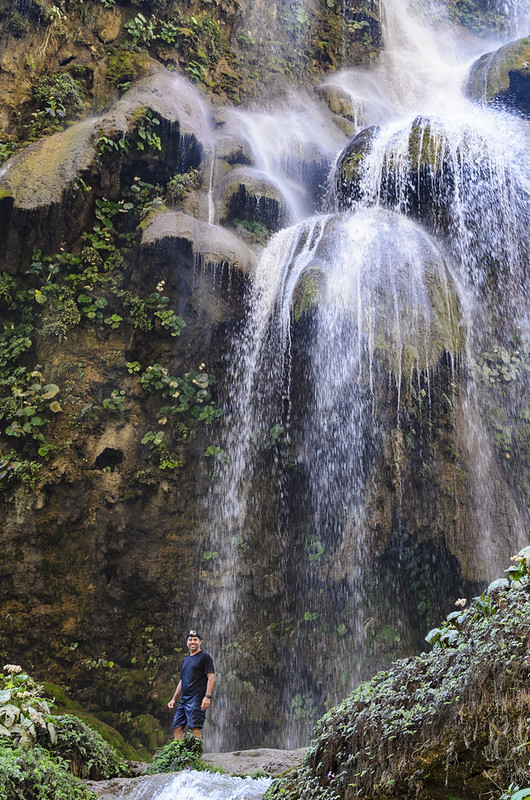 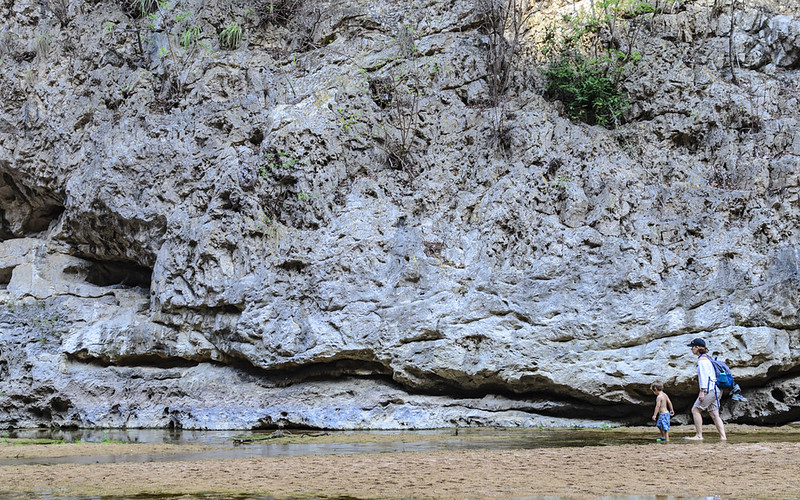 Towards the afternoon, our secluded spot started filling up with new arrivals.  Was definitely a wise move to stay in the parking and enjoy the canyon in seclusion. But, even with the packed parking lot up above, the canyon is so large that the crowds didn’t feel too terribly bad as they filtered in.  I had to give a hand to those visitors that carried large ice coolers, tents, (you can actually camp right next to the river), and cooking supplies.  I certainly wouldn’t have wanted to schlepp all that gear back up the canyon steps when the day was done!

On our return walk through the canyon, we heard what sounded like gunshots echoing across the valley, and I immediately jumped on top of Indigo to cover him.  Well, now I know what my instinct would be should there be real gunfire!  As I loosened my grip on Indigo, Okan pointed to some splashes in the water just ahead of us, where rocks were falling down from the canyon walls.  Just as deadly as bullets, and just as scary to be honest. We moved into the center of the river bed and safely made our way to the staircase leading back to the parking lot.

After the excitement, we tried to coax Indigo into climbing the whole staircase back, but promises of ice cream didn’t inspire him a bit, and Okan carried him most of the way back up. I felt a need to personally count the steps on the route back, and there are indeed 700 stairs!  Okan thought I wasn’t speaking because I was out of breath, but really, I just didn’t want to lose my count!  Indigo still got an ice cream, as we all did, because the cooling effect of the water was long gone by the time we reached the top. 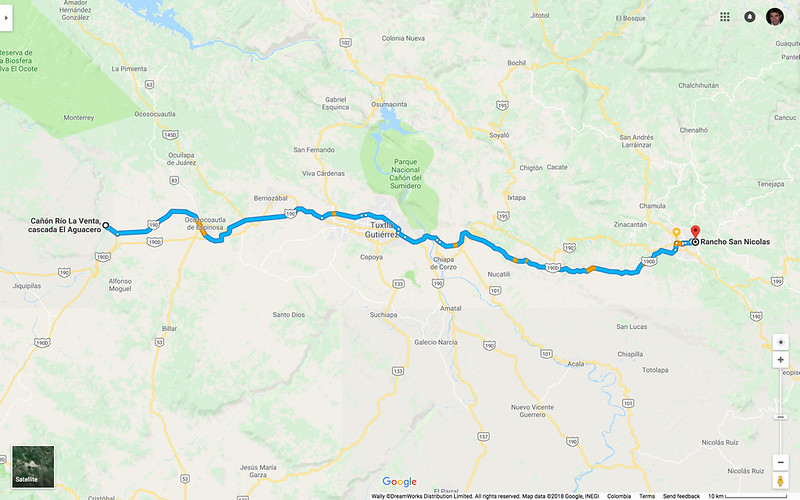 After the waterfall, off we went through the mountains to the colonial town of San Cristobal and the campsite of Ranch San Nicolas just on the outskirts of town. We should have paid closer attention to the “way around” San Cristobal, as going straight through the narrow streets of this Colonial town in a huge truck camper was not fun to say the least.  But with minimal cursing, we finally made it… and look who else made it… La Brigade!

La Brigade pulled into the campsite around midnight, with the driver having a bit of the shakes after making the harrowing drive through town. We understood completely as they recounted the tale of clogging the streets with the bus, horns honking in every direction, and causing turmoil in town for well over two hours. Mind you it’s only a 15 to 20 block stretch to get through town! 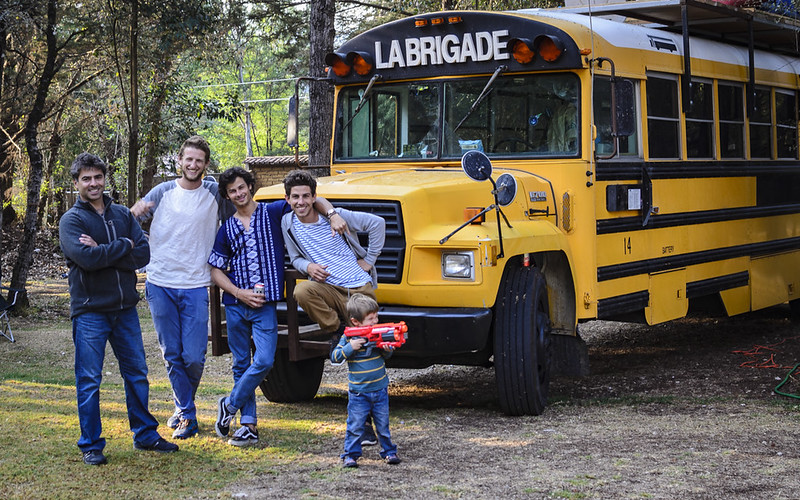 La Brigade is run by these really awesome French kids who bought a school bus, and turned it into a rather plush moving hotel.  For the “check out that rig” crowd, I believe their website documents their school bus build process. They drive their tenants to destinations throughout the Americas, showing them the sites, and providing delicious meals.  It appears they are taking new reservations for a second trek.  (Check them out and make a reservation if you are so inclined:  https://www.facebook.com/Labrigadeduvoyage/) They are a warm and fun group of guys, and easily befriended Indigo by letting him romp around their hotel, or perhaps it was the toy gun that did it. 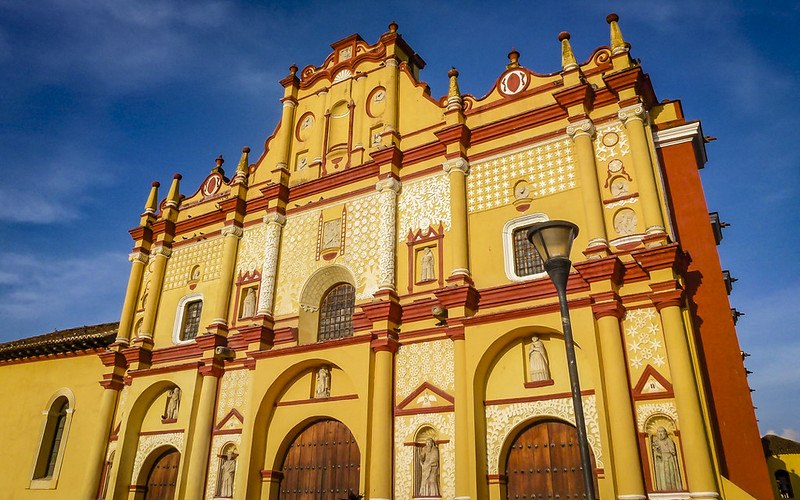 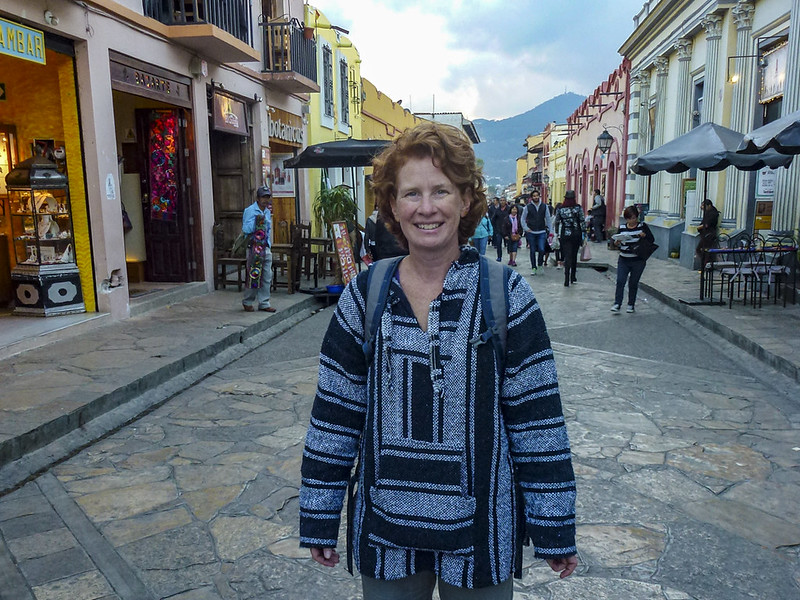 Our frequent walks into town continued our struggle with Indigo always wanting to be carried, and we took turns both trying to convince him to walk, then giving up and carrying him. Once in town however, he seemed to be able to walk without issue. The town is very quaint with street performers and nice shops, and an open air market that brings the locals selling traditional items.  Since it was cold here, we just had to buy the standard Mexican Baja Hoodie.  I don’t know whether to nod, or just feel silly, as I pass other tourists wearing the same exact hoodie.  I felt just like the unprepared San Francisco tourist I used to tease when I’d see them walking about in the San Francisco sweatshirt because they didn’t believe that the city really is THAT cold in the summertime.

There was plenty to entertain us here, including some very interesting paper mâché figures of Donald Trump on display.  It wasn’t hard to understand what the people here think about the 45th President of the USA when looking at these.  When we first started out, we were hesitant to pull out American passports, and were thankful for the Canadian plates on the truck.  But all of the Mexicans we meet convey admiration for the USA and the Americans they meet. It seems they can hold the actions of governments and political figures separate from their citizens, for which we are grateful as we travel through Mexico.  We have found time and time again, that Mexicans are a proud and hardworking people, warm and affectionate, and most of all…very welcoming. 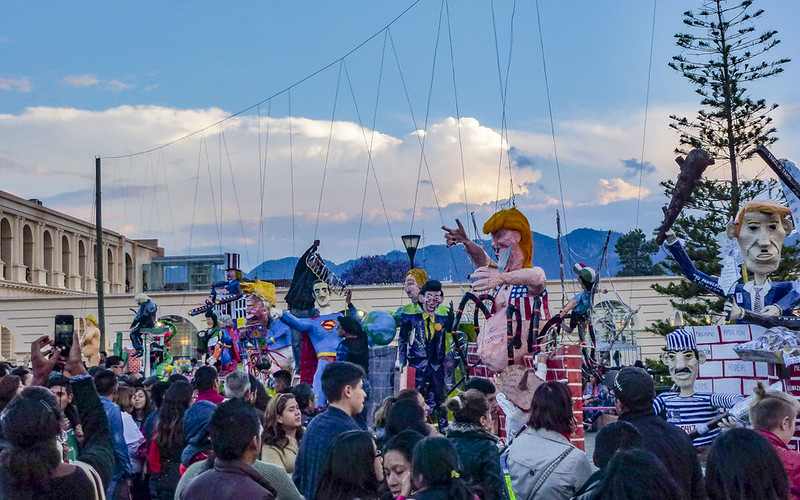 At the market, we saw the indigenous women bringing their wares to market, dressed in their goatskin skirts, and usually carrying a child on their back.  My jaded self was thinking the goatskin clothes were a tourist ploy when selling their wares, but driving through the back roads and seeing families tending their land and going about their lives, I realized this was truly the real deal.  I wonder when my skepticism of authenticity will fade, if ever, during our travels! The dancers however, in the decorative feather ensembles…I’m pretty sure that was strictly for the performance in the market square.

We stayed in San Cristobal for a long time, longer then most campsites.  Indigo and Okan got sick here and I made my very first homemade chicken soup. This is actually a big deal, as Okan is the main cook in our family, and I rarely make anything from scratch. Along with the new domestic skills, I tended to all-night puking for 3 nights running (not because of the soup I assure you), and kicked into caretaker overdrive all day, operating on zero sleep. 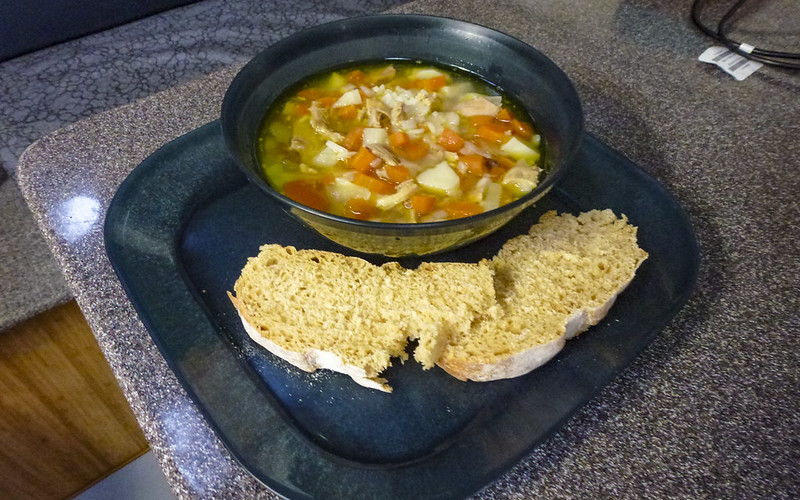 When Okan was feeling better (because of the homemade soup I’m sure), he decided to chop down some bamboo trees at the campground, and design an awning for the camper.  Was such a clever design, that our neighbour chopped down his own bamboo tree to create something similar.  Amazing what these engineering types sort out whilst hanging out at campsites. Once the boys recovered, it was time to say goodbye to the cold evenings and head to bluer waters… 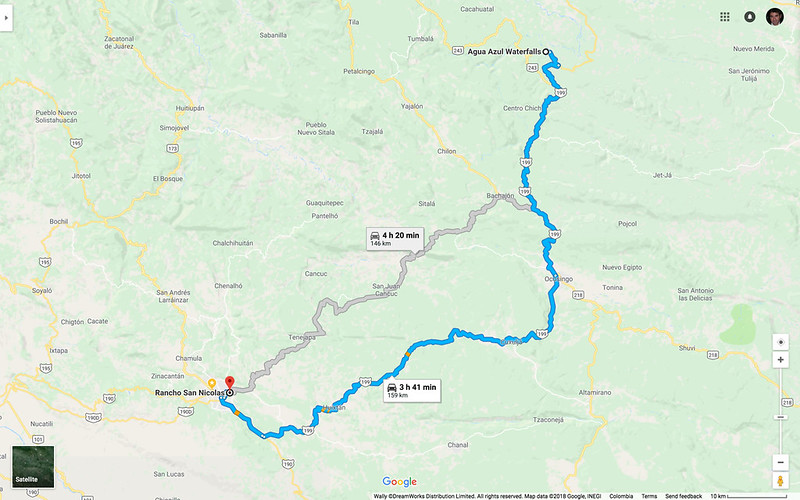 We headed off to the mother of all water falls in Mexico…Agua Azul.  Our campsite was to be another parking lot, and we were pretty comfortable with that, having just camped in one.  But, whoa…we did not expect a parking lot like this. It was huge, and we were parked between numerous tour busses, and listened to blaring live music coming from tiendas, restaurants, and a large pavilion, and I think a couple of cars as well. 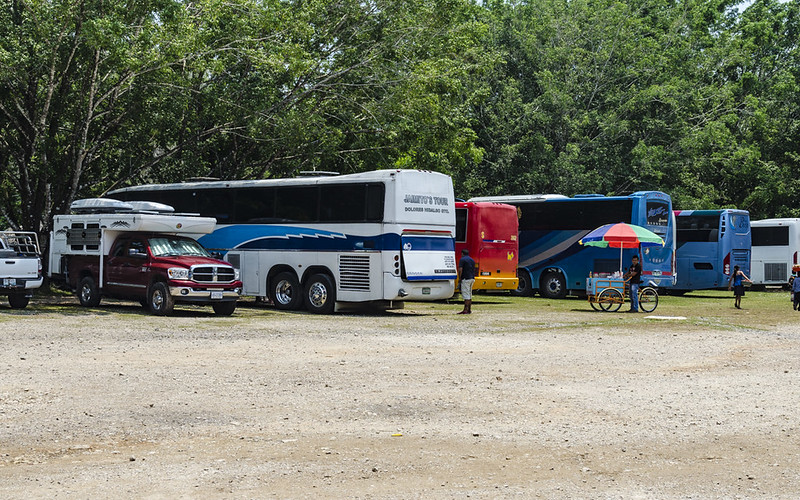 Even with the lack of sleep, we managed to get up fairly early, which is a must here if you want to enjoy any serenity at all at this waterfall.  The path that winds alongside the waterfall is crowded with permanent kiosks with hawkers selling their wares, the entire way to the top.  They were out and ready before we even opened our eyes, and they stay open until the last tourist is gone.  So you look one direction, and you see jaw dropping beauty, turn your head back to the bank and you see chaos.  But the chaos to our backs, was well worth the visit to this amazing place. 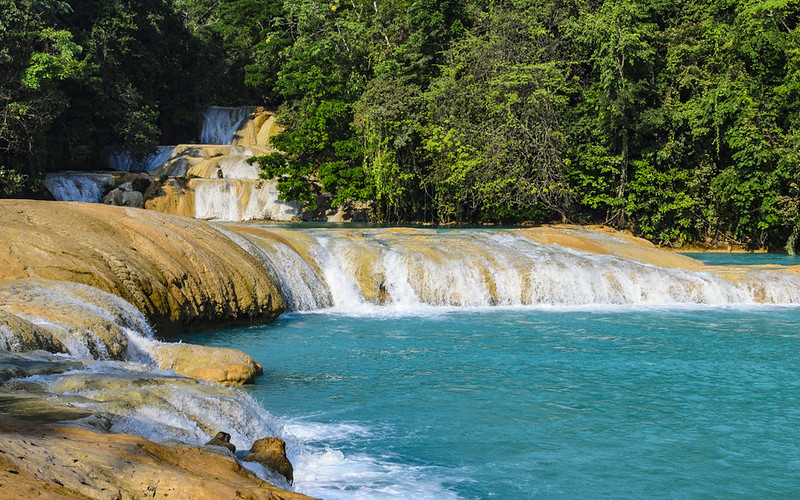 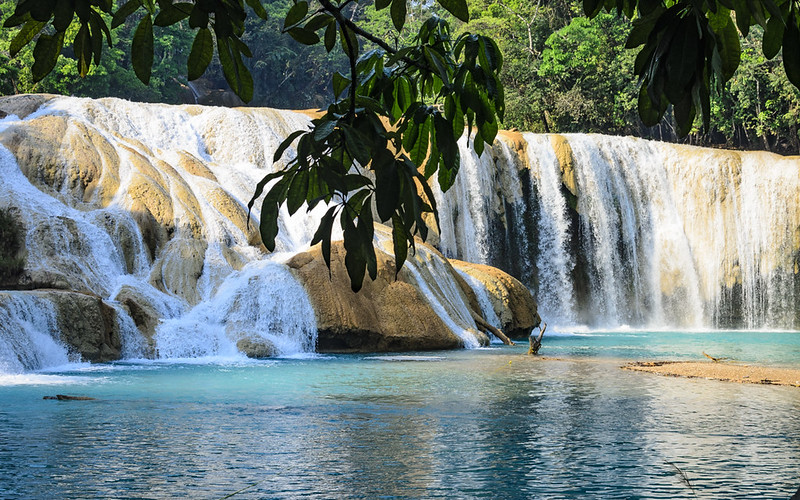 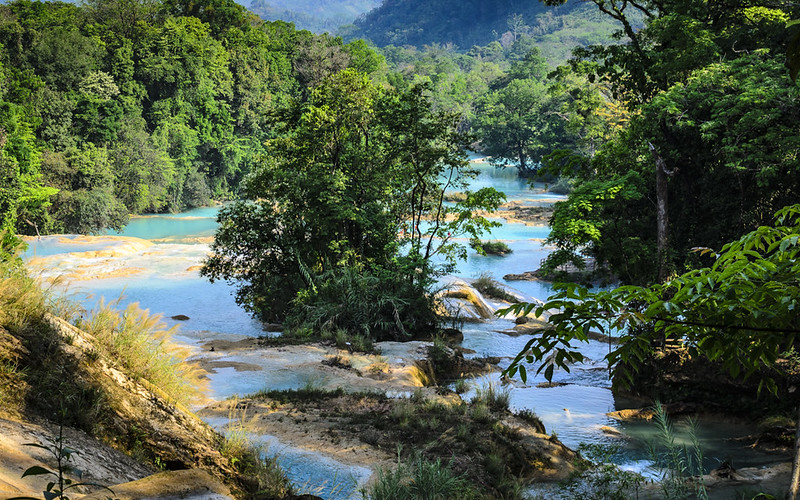 We kept hiking and hiking all the way past the last vender, and found an empty serene pool in which to swim.  The path continued on, and I believe if you don’t have a toddler who refuses to walk, and want to hoof it further, you can find an even more serene and peaceful swimming holes. 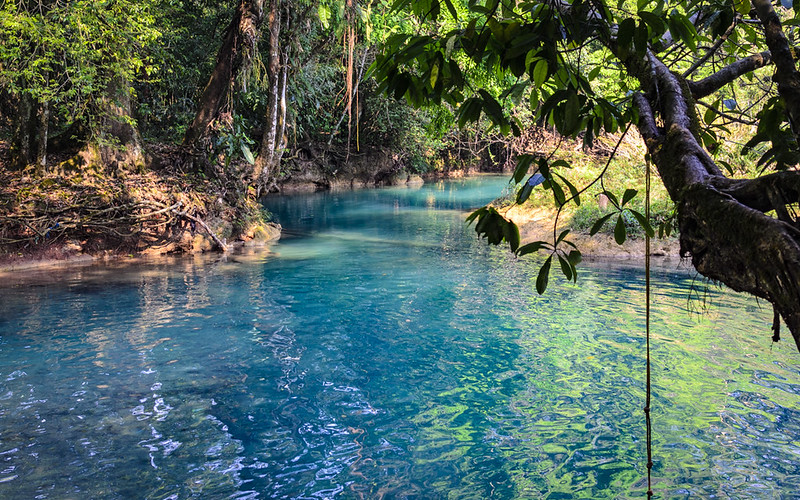 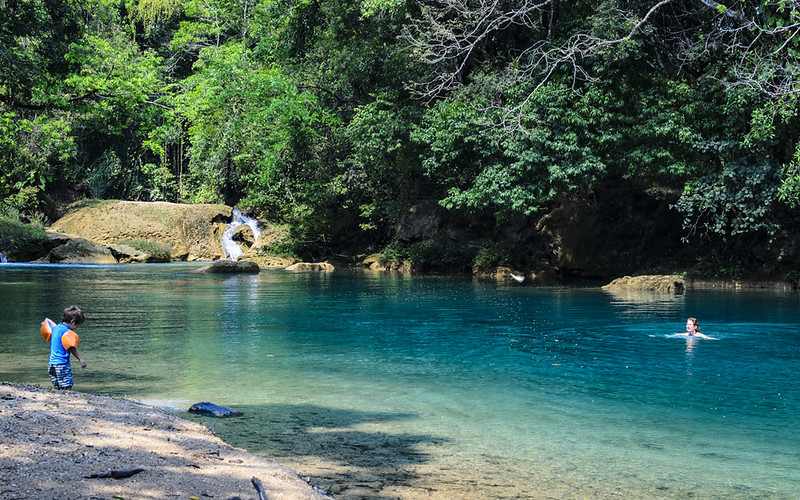 The water here was so incredibly blue and inviting.  So so so inviting, and so so so cold!  But there was no way we were going to miss a chance to swim, and our blue lips and shivering bodies soon returned to normal temperatures as we headed back down the path, through the chaos, and off to our next destination.