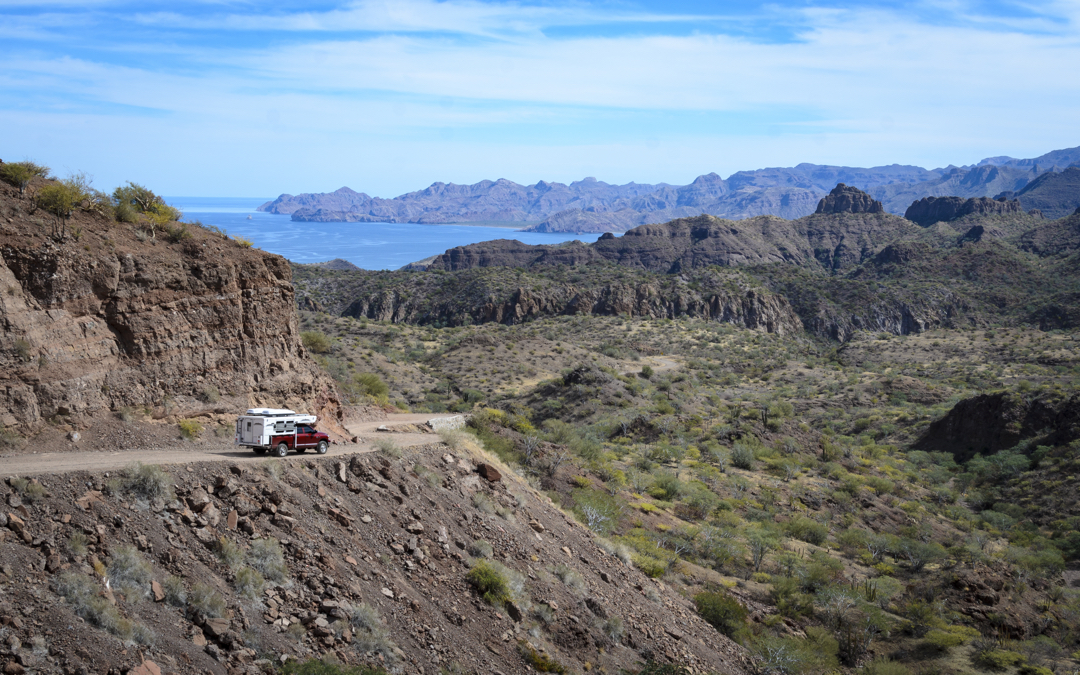 After hanging out at the beach in Bahia Concepcíon, we headed for another new camping experience…city camping! 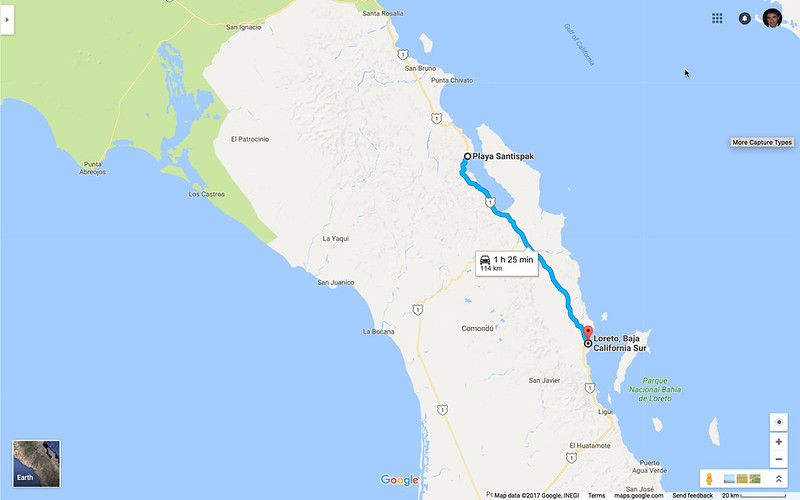 Loreto, the first Spanish colonial settlement of the New Spain on the Baja California Peninsula is close to the beach, has a marina and easily accessible tours to the nearby islands, but there is no beach camping around.  We checked out one campground that was secluded, green and lush, but no others campers were there.  We realized we really do like to be around people, so we headed over to the more popular RV Park that we passed on the drive through town. 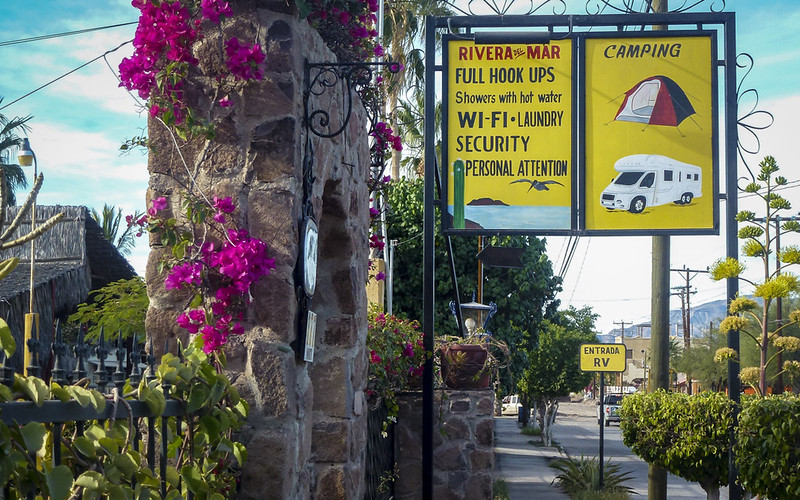 Loreto was a sweet surprise in so many ways.  I wasn’t thrilled with the RV Park at first, but after setting up I quickly settled in and felt very at home.  We met great new neighbours from Canada again, Alex and Dollie, and had a great time chatting with them throughout our stay.  As a bonus, the campground owners had a son who loved to dig in the dirt as much as Indigo, and this gave Okan and I needed time to regroup, clean, do laundry, and re-organize the camper (again).

We also unhitched the camper for the first time here to take a side trip to an old mission church up in the hills west of Loreto in San Javier.  To get to San Javier, we had to wind our ways through a narrow mountain road, high above the sea. It was fun to be in the truck without the camper attached, but we still managed to scare ourselves during the drive. 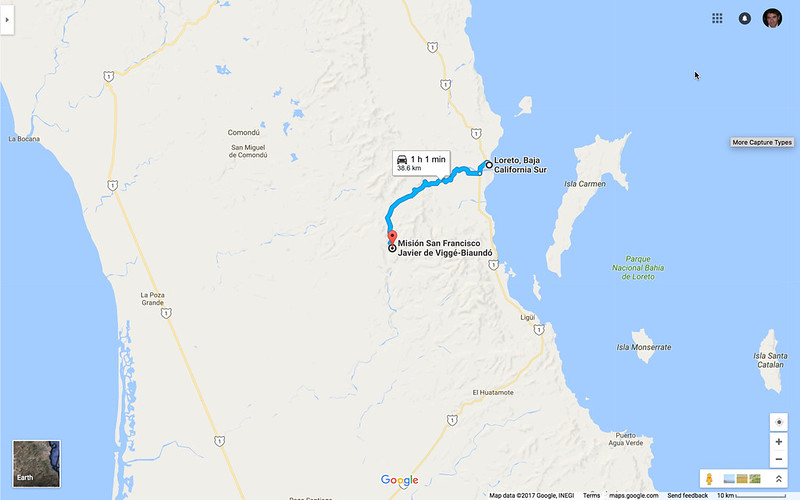 We passed several streams with water, which was a novelty since most stream beds are dry throughout Baja.  We crossed one that seemed fairly shallow, so we gunned it to make a splash for Indigo.  Whoops!  We ended up hydroplaning across the small bridge over which the water was running.  We also ran into construction on the road, that had us weaving in an out of diggers and heavy equipment, dodging swinging buckets while going over ruts and dirt piles deserving of our 4WD.  But in the end, we were rewarded with a visit to a great Mission where we could relax, and wander around the grounds.  Indigo was interested in the church, but decided to spend the majority of our visit on the city street hanging out with one of the local dogs. 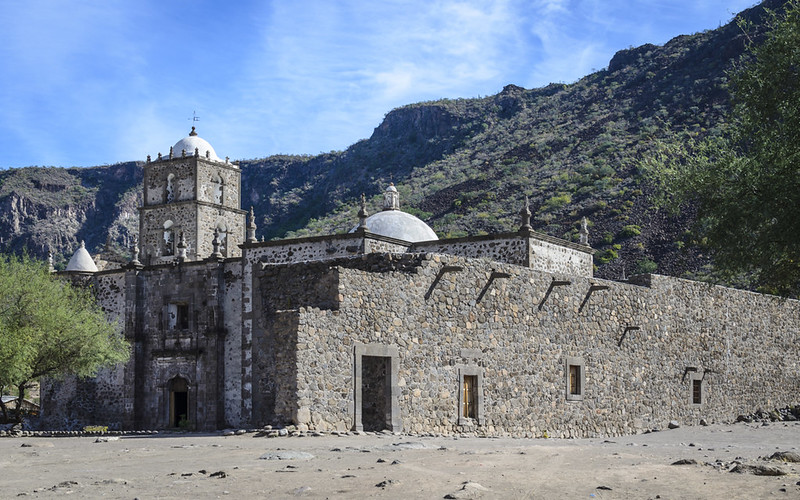 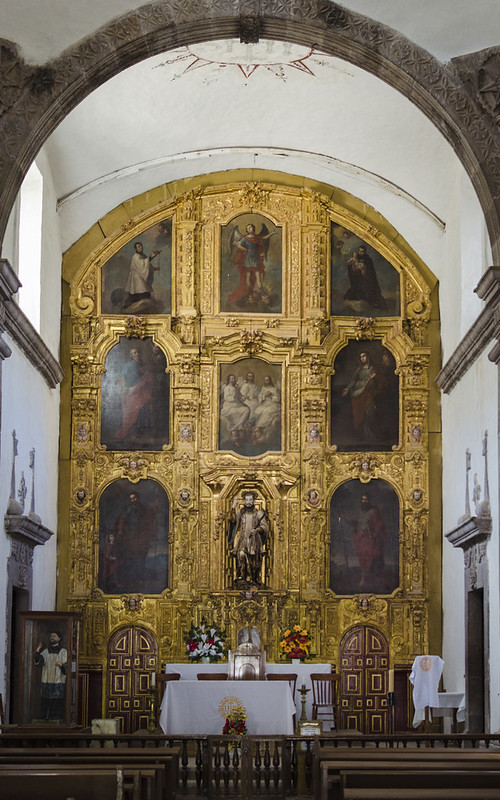 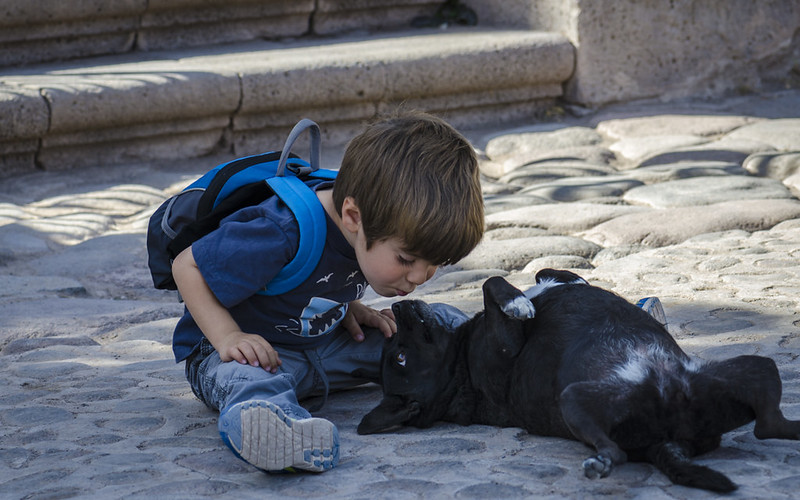 It was also here that I had pangs of remorse for taking Indigo away from his friends back in Vancouver, as I watched him chase after 3 kids in the church square shouting “Hey! Stop! I want to play with you.”  They didn’t want to play, and kept running away from him.  But I suppose that could also happen in Vancouver too.

Back in town, we went searching for someplace to eat. Okan always wants to eat local foods, especially from the food trucks or cafes, and avoids touristy places as much as possible.  But in the centre of town, there was a secluded, very touristy, eatery that looked great to me, and he finally succumbed to my wishes (but not before he made us check out 4 other places).  Okan is to eateries, as I am to campsites.  He needs to check out all his options before making his choice.  I am happy to say, we both enjoyed the meal. 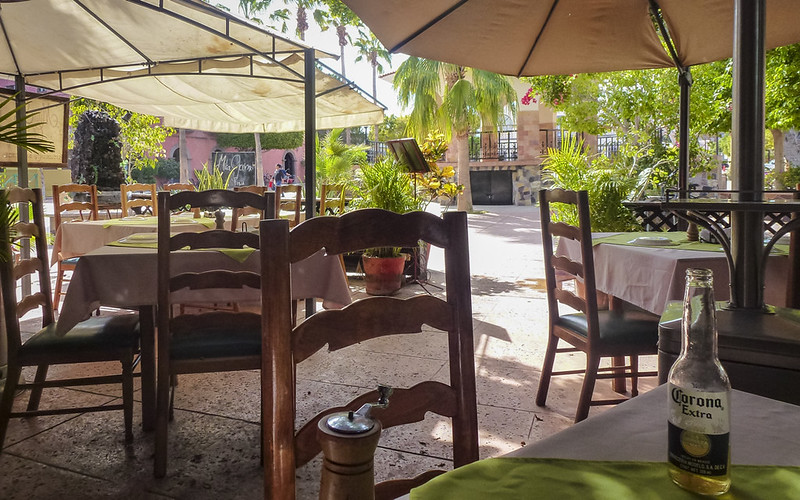 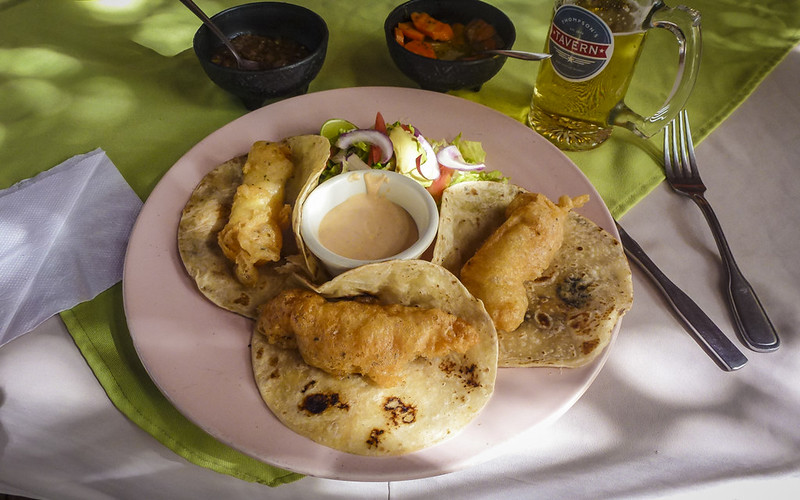 We had wanted to do so many things in Loreto, the boat ride to the islands, hikes to inland waterfalls, but a single trip to the mission was the most we accomplished.  We just enjoyed the downtime, being comfortable in a nice campground with good people, great showers, and the conveniences of town with good markets and restaurants a short walk away.  And the fact that Indigo and the owners’ son played all day without complaint, was a great reprieve as well.

The desire to try to “do everything” as we would do while on vacation, is slowly subsiding.  I still wish we had seen the islands and perhaps the whale sharks while at Loreto, but I’m learning…slowly…to just let life be what it is for the day.  Somedays we have lazy weekends in suburbia where nothing gets done and no adventures are had, and this is something I’m working on being ok with while we travel. 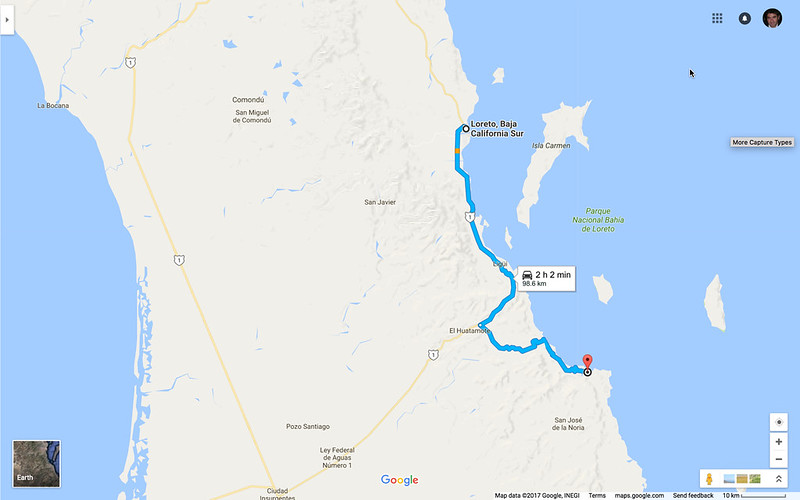 We packed up in Loreto and headed off Agua Verde which was not on our radar until a fellow camper recommended it to us.  He said it was a beautiful little fishing beach and worth the drive. The map showed a fairly straight route to the coast, but then there was this place where there road curved off to the left in a huge semi-circle.  Okan asked why on earth didn’t they just continue the road straight, and I guessed it was going around a huge parcel of private property.  And then we came around the corner and saw the reason.  There was this huge canyon between us and the beach, with the most treacherous road curving around it’s edges. 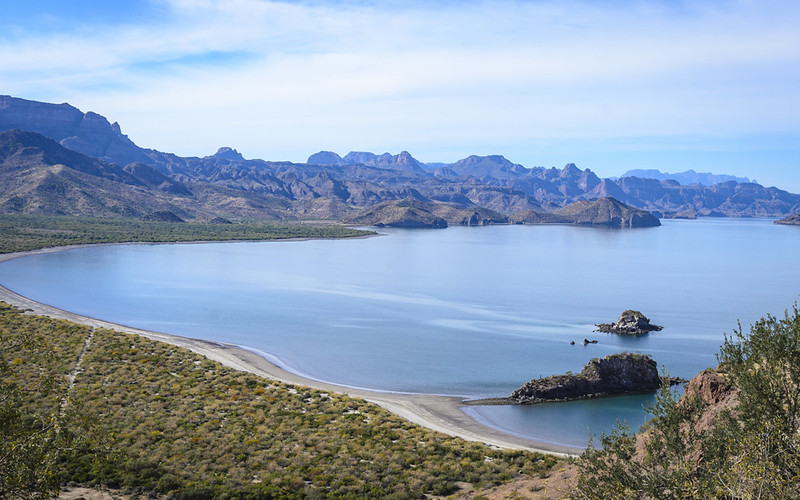 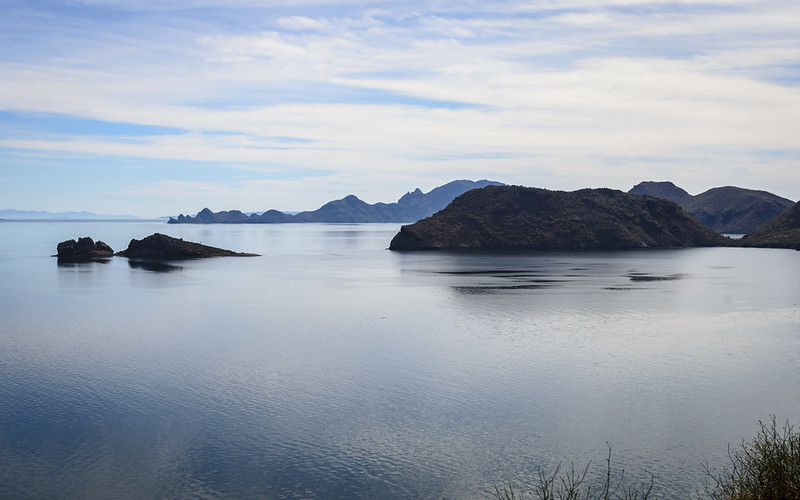 Being on the side of the truck that looks over the edge that plummets hundreds of feet down, I found myself in a hard lean over to the driver’s side, as if that was going to somehow keep the truck on the road.  There seems to be only one couple that has chanced this road with a 5th wheel, the kind of camper you pull with a large truck, and they’ve been coming for well over a decade every year.  They said the road has actually gotten better in recent years.

When we got to the beach and parked, the very first thing I did, was head to the water with Indigo while Okan started to unpack.  I was welcomed by Francesca, the owner of the 5th-wheel on the far side of the beach, when Indigo simply stripped down and jumped in to the water to play with her dog.  This would be the first of many times Indigo felt a need to strip and jump in the water at Agua Verde.  When the sun had almost set, and Indigo was back on dry land, we took the time to look around and realized that this was truly the wild camping we had been looking forward to. I didn’t even care where or how Okan positioned the camper, I was loving everything about this place. 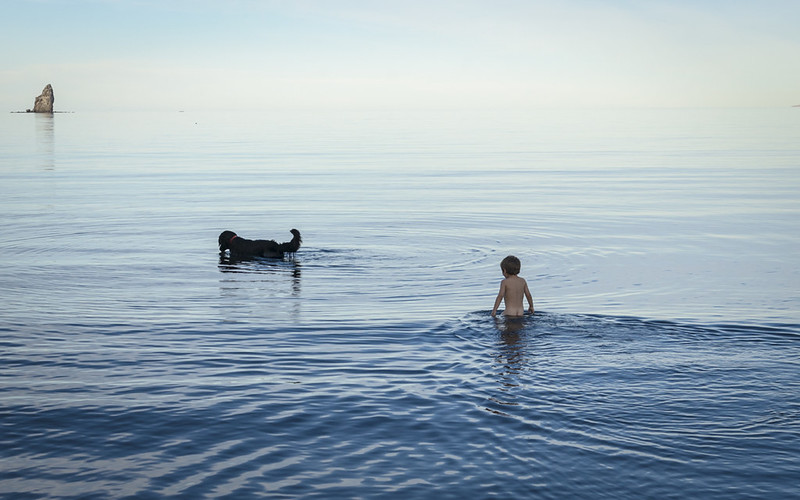 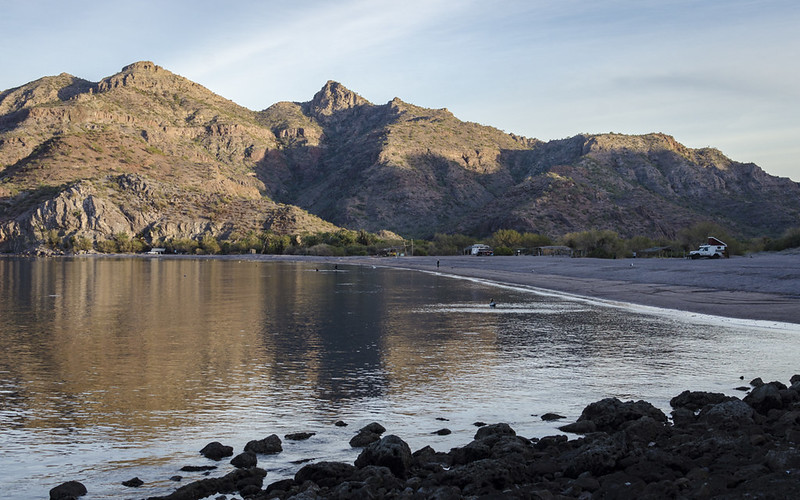 My obsession with Pelicans continued full force here in Agua Verde.  I took literally hundreds of pictures and videos of them, trolling up and down the beach, trying to capture their synchronized flying and diving skills.  I was convinced they thought I was stalking them with a weapon, because they kept moving to the other side of the beach every time I got close.  When I finally did get close, I couldn’t believe just how huge these birds are, and that makes watching them fly all the more impressive.

Okan’s obsession with fishing was also in full force, and he immediately had the boat out, ready to launch first thing in the morning.  He disappeared for an hour around a small island in the bay, and came back with a trigger fish, which locals call Cochino, and a big smile on his face.  But the main fishing event was yet to come.  The locals directed him to fish off the point, and we all headed out together to watch Okan cast.  I thought he immediately got his hook caught on a rock with his first cast, but he actually pulled out fish.  In less than an hour he pulled out 7 more trigger fish, and I’ve never seen him smile so big, for such a sustained length of time.  We were going to be eating a lot of fish! 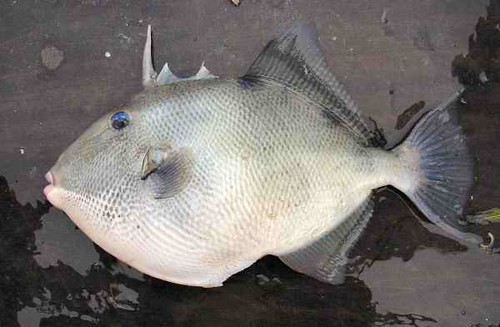 Unfortunately, we had no idea how to cut up these fish.  Thankfully an elderly fisherman was watching Okan puzzle over what to do, and offered some help.  He gave Okan a quick demonstration on how to cut the fish, then handed the knife to Okan motioning for him to give it a try.  Something perhaps in how Okan held the fish by only his fingertips when maneuvering the fish must have spoken volumes, because once Okan finished, the fisherman promptly took the knife back and made quick work of the remaining fish.

With enough fish fillets in the fridge, we decided to do some hiking.  Indigo always wants us to carry him everywhere, so we hyped up this hike to the “secret beach” talking about how it would be his first real hike, and bribed him with sweet rewards should he do the whole hike himself.  He started off very motivated, with backpack and hiking stick. We had to scramble over lots of rocks, as the tide was coming in, and he became quite the rock hopper.  The secret beach was beautiful, but had no shade, so we hastily returned. Indigo didn’t do quite so well on the return trip, but I held strong through 5 individual mini-tantrums, where I patiently waited for him to rest, and he eventually walked the whole way back.  But this was also the start of Indigo expecting treats as rewards for hiking…and here we are months later, still trying to break the expectation.  It’s an uphill battle, as hiking for accomplishment doesn’t seem to motivate him very much. 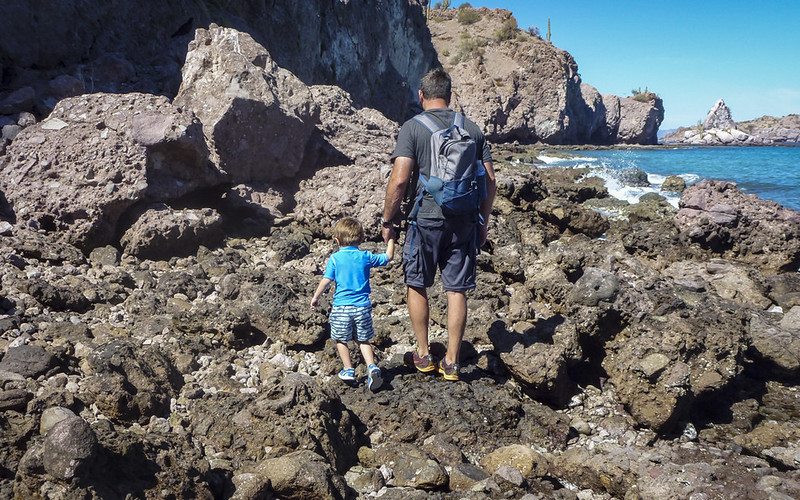 Our days here were simply great, and we still wistfully say “remember Agua Verde” when we think back on all the places we’ve been so far.  Fishing, hiking, reading, making fires, and chasing a sometimes naked boy around the beach. 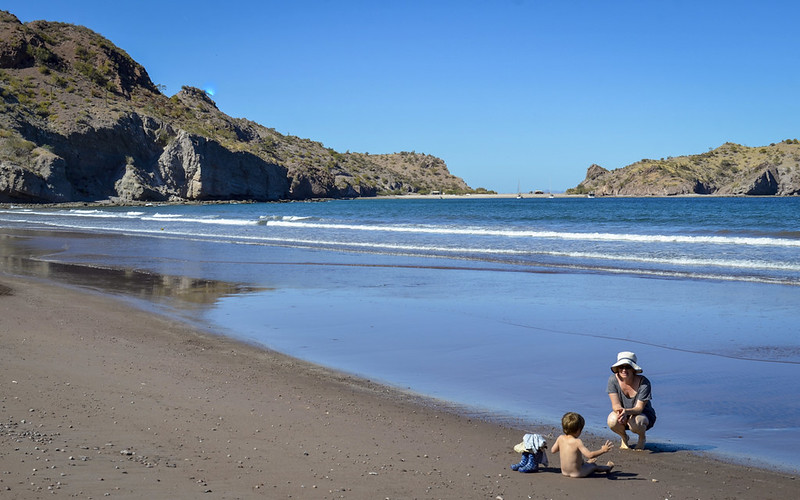 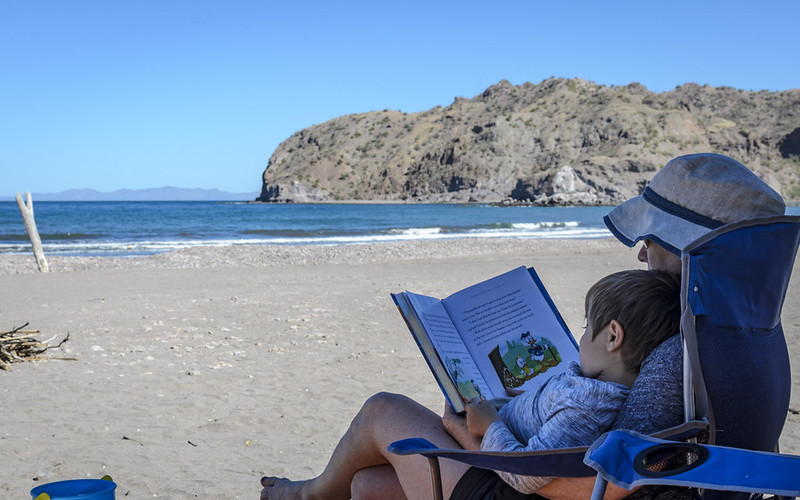 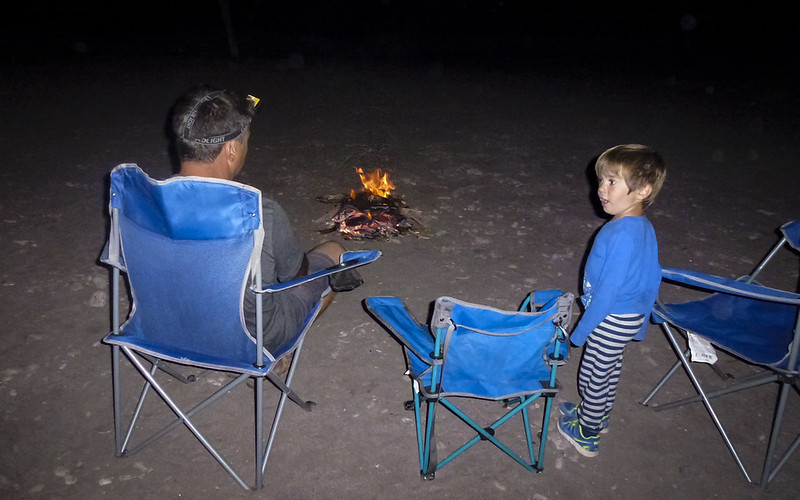 I was a bit sad to pack up and leave Aqua Verde.  I was the most relaxed here. We felt so much freedom to do or not do anything all day long.  No churches to see, markets to visit, or tours to reserve.  But we finally packed up and left our great campsite, feeling very proud of ourselves for being in the near-wild for almost a week, and having it go so well.  I say near wild, because we still could buy basic groceries and drinking water in the village, and walk next door to get a fish taco if we didn’t want to cook. 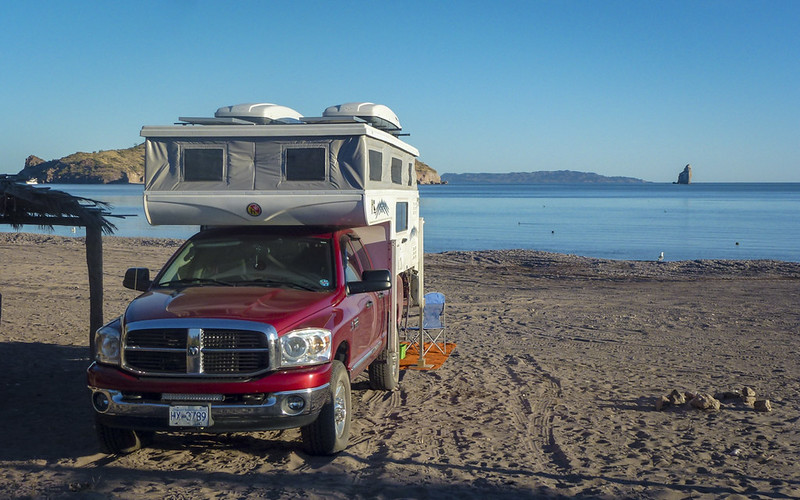 The drive back was rough, not just mentally, but because of the steep mountain road which had the transmission reaching its maximum safe temperature limit every ten minutes or so.  Never before had we actually looked forward to meeting up with a washboard road. We had to stop on that treacherous road numerous times waiting for it to cool down, before we could go a little further.  Several passing vehicles checked in with us and make sure we were ok.  It’s so nice to experience neighbourly people no matter how remote we venture in Mexico. 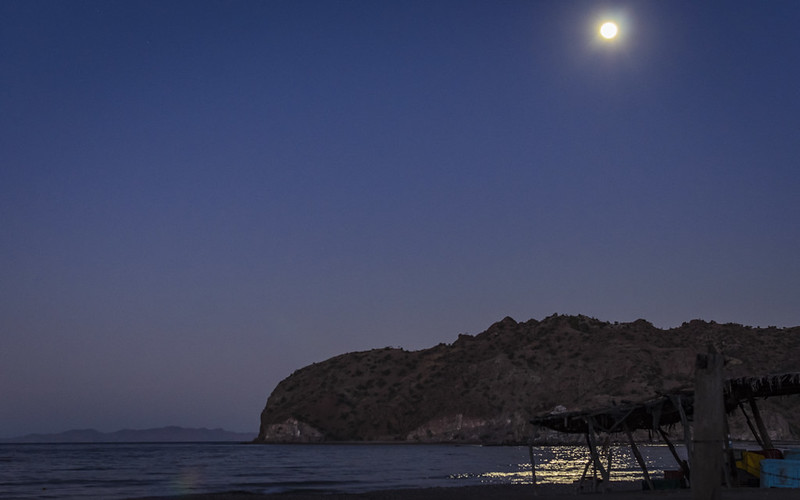