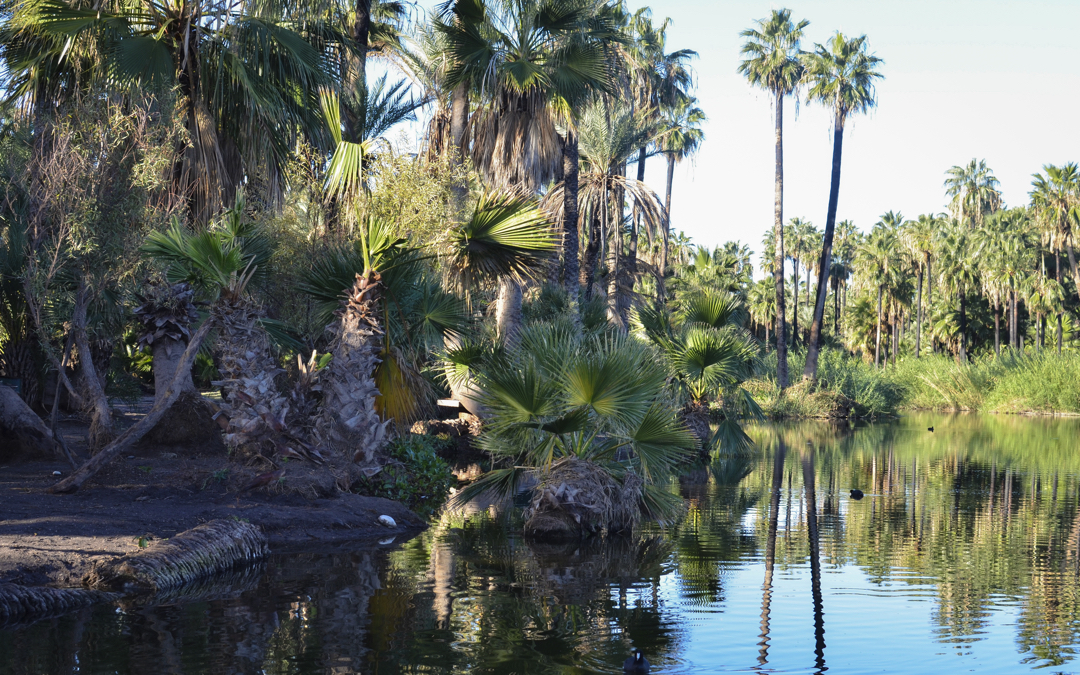 After our lazy days in Bahia Los Angeles, we were ready to find some adventure.  We thought of taking the road south along the Sea of Cortez, but we couldn’t find any information on how far it went, or it’s condition.  Only one guy said he’d been down that way, but only made it about 5 miles outside of town.  I was secretly loving the idea of taking the unknown road, thinking the road itself would be a great adventure, and we’d certainly get to finally test out the sand ladders.  But taking that road also meant we were sure to get lost, possibly spend hours stuck, and possibly be stuck in the middle of lord knows where at night.  So, our cautious side won out, and we headed back to the main highway, Mex 1, to continue our journey south. 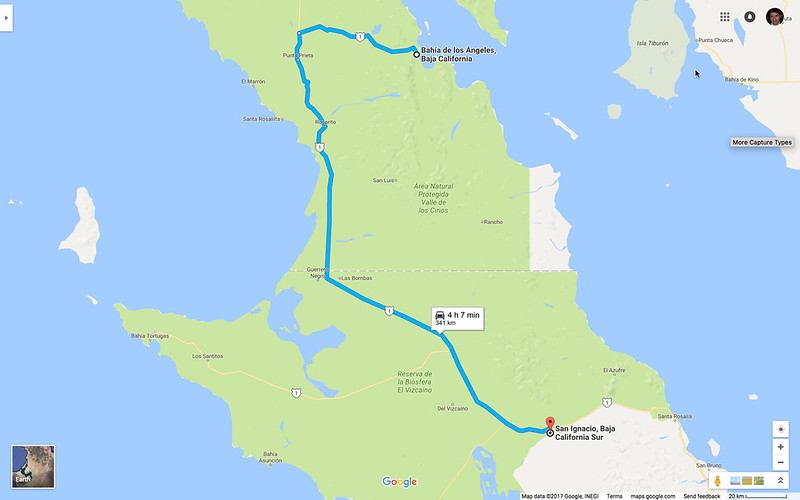 We set our target on San Ignacio, because our brains had been wired to think we had to stay on the Sea of Cortez, and that was about as far as we could drive in a day.  We were stunned when we arrived after hours of desert landscape, to find ourselves in a jungle like Oasis. We obviously didn’t do our homework on this one, or even look at any photos, because the change in environment was a great surprise. San Ignacio is near a lagoon with amazing lush green foliage and palm trees.  Because of recent rains, the campsite was extremely muddy, and we took an ungodly amount of time choosing our spot.  I wanted a site that had the a perfect view, and Okan wanted a spot where our tires wouldn’t sink too far into the mud, and he didn’t have to deal with trying to level the camper.  It would have been much easier for us to pull forward into the campsite, but there was no way I was going to be satisfied with our camper door opening out onto anything but that gorgeous lagoon. 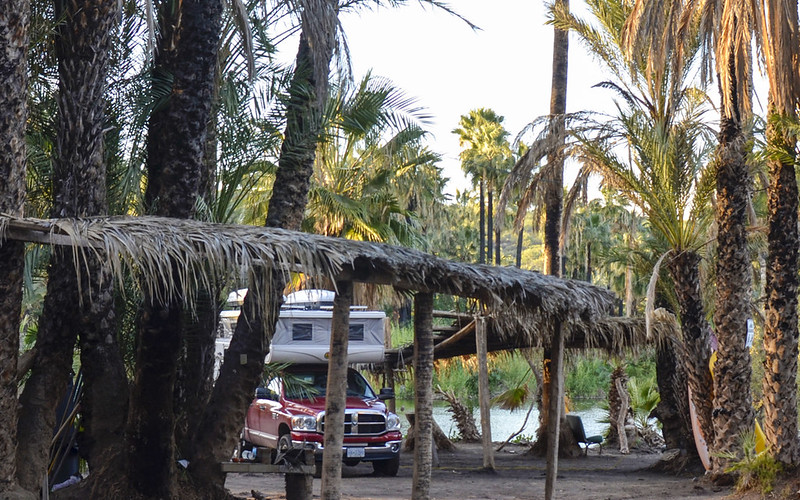 Indigo was oblivious to our struggle over how to park, because there were little black ducks everywhere that needed his immediate attention.  I found some old bread for Indigo to toss into the lagoon, and discovered they were rather aggressive and not so kind to each other. I immediately had to step in and try to make sure some of the outcasts could get a bite or two.  I don’t think Indigo noticed the social dynamic going on at all, he was just happy throwing bread. 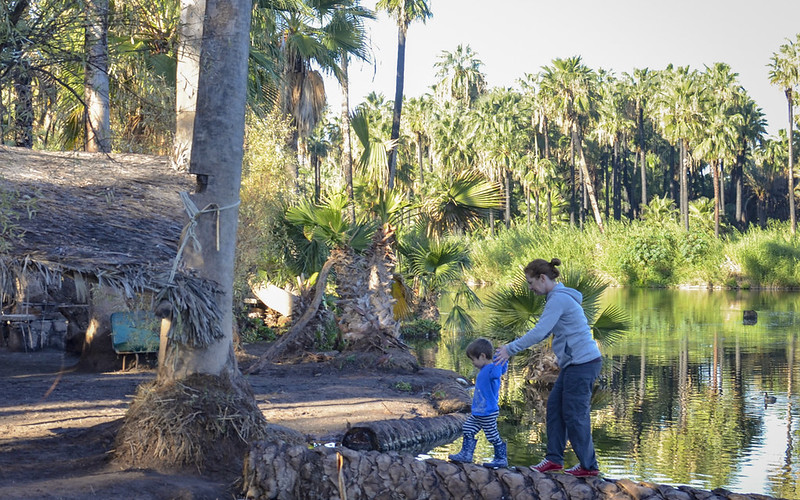 We really thought we’d be in and out of this campground and on our way back to the Sea of Cortez in the morning.  But the whale watching season was unfolding, and for not too long of a drive, we could head further west and might be able to see some Grey Whales. Another camper pulled into the campsite just after returning from a whale watching trip that day.  After seeing videos of them actually petting the whales, we were convinced it was a must see, and decided to go in the morning.

Early in the morning, we stopped in town to make reservations with Ecoturismo Kuyima then set off for San Ignacio Lagoon.  The road seemed really great, it was new and smooth, and then all of a sudden it wasn’t great at all. It turned into the most absurd bumpy washboard sand road just a stones throw from our final destination, and it had our insides and our nerves shattered before we arrived. 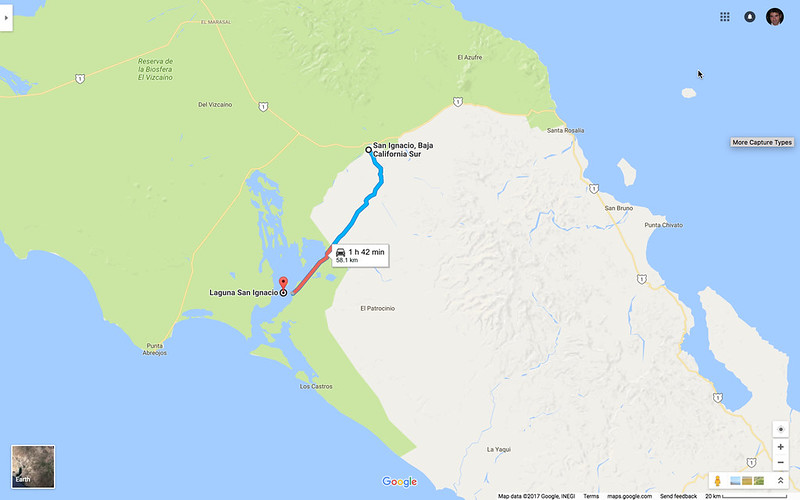 We showed our reservation papers to the first person we saw, who ushered us into a waiting area where they told us about the whales, the lagoon, and what we could expect.  We were thrilled that it would just be the 3 of us on a small boat.  That would reduce my stress levels greatly as I had no idea how Indigo would do for 90 minutes on the water.  He seemed really pumped up for the trip and couldn’t wait to get on his life jacket.  Some of our adventures start out great, but don’t always end great, so I was hoping the enthusiasm would last. 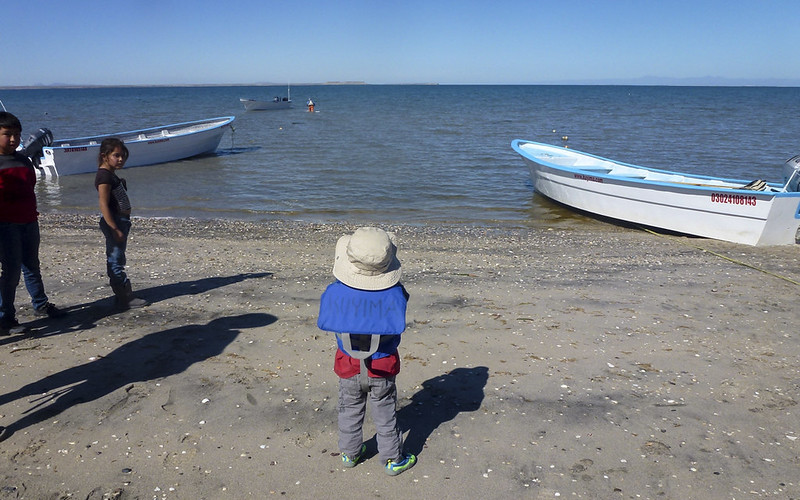 We had to wade out into the water to get into our boat, and then we were off.  I don’t recall our captain speaking at all, he just smiled a lot.  The 15 minutes to get to the viewing area were a treat for Indigo, and the rest was a treat for me and Okan.  The whales were literally all around us.  We would motor close to one and see if she wanted to stay around, or leave.  Many of the whales actually push their babies towards the boats.  The funniest part for me was watching the mother whales come straight up out of the water and stare at you with one eye, which is just beside the end of their mouth.  She would sink back down very quietly into the water, and after deciding you didn’t look suspicious, would swim over with her baby beside her. 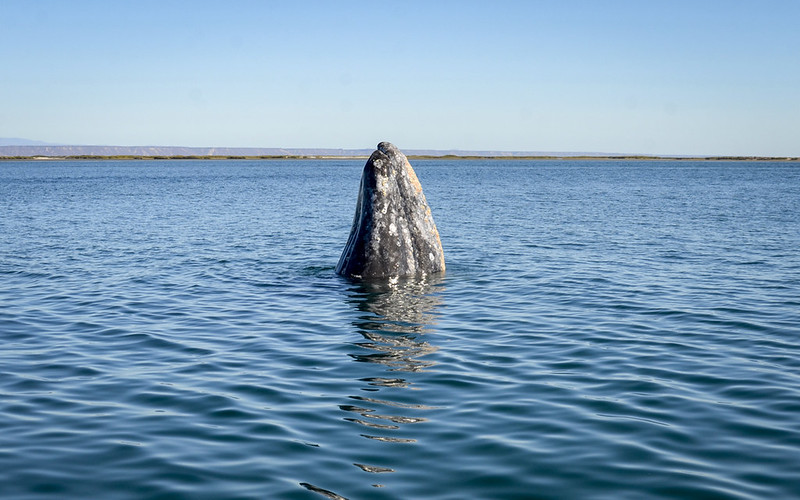 We heard that the whales can sense good auras, and are especially attracted to boats with children.  Stories about whales leaving as soon as couples started bickering were recounted to us from the guide.  I kept thinking, “oh crap, the whale is going to know if I get annoyed on the boat, I won’t be able to hide that from the whale, but maybe Indigo’s aura can balance all that out.”  I was painfully aware of bigger smiles and perhaps over the top cheeriness, each time a whale was deciding to stay or go. Then I started to wonder if maybe they tell guests this so that people will try to get along really nicely on the boat.  After all, I’m sure the captain doesn’t want to be around people bickering, or in foul moods all day.

We didn’t get to pet any whales, but it was still a fantastic day.  Indigo got bored in about 20 minutes, so I had to keep him from trying to get close to the captain to steer the boat and check out the motor, while Okan snapped as many photos and videos as possible.  When it became clear that Indigo wasn’t going to last much longer, as indicated by him trying to sleep on the floor of the boat, we asked the captain to cut the trip short and take us back.

Grey Whale with its Cub in Lagoon de San Ignacio from Okan Ataman on Vimeo.

Back at the same campsite, we decided to walk into town for a bite to eat.  The main town square reminded us of Savannah Georgia with it’s huge trees outlining the centre square, across from an old mission church.  I took Indigo into the church while they were having a service.  He picked up right away that he needed to be quiet, and sat amazed looking around.  He immediately and instinctively switched to whispering.  For those who do not know Indigo, he is pretty much always talking, and always talking loudly.  One of our friends in Vancouver has always teased us about what she calls Indigo’s only two volume settings: loud and louder.  I guess if I would like some peace and quiet, we are going to have to visit a lot more churches. 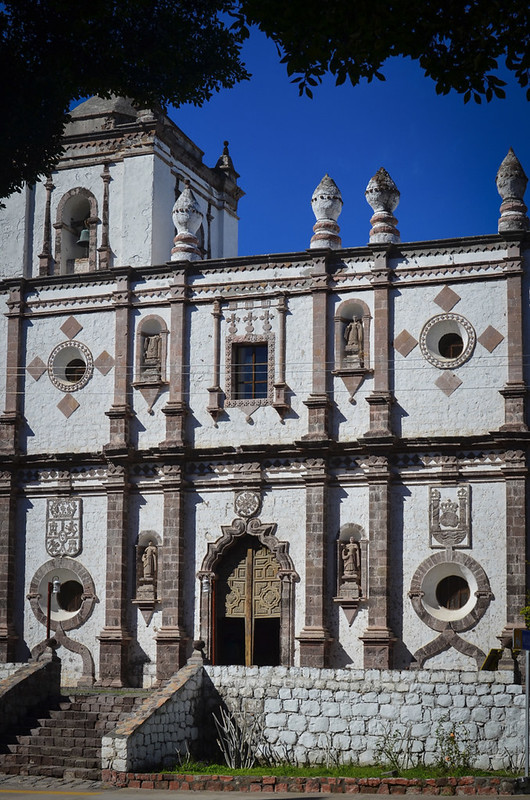 We had a lovely dinner while sitting at one of the restaurants in the main square.  We enjoyed fish tacos again, while Indigo feasted on a hotdog that we got at a food stand next to the restaurant.  We don’t get to relax much, or eat out at restaurants, so this was quite a treat and deserving of our first beer in what must have been weeks.

We got an early start in the morning to head back to the sea of Cortez.  After our beautiful sunny day in San Ignacio Lagoon, we were looking forward to seeing that sun at the beach, enough to perhaps even get in the water with Indigo.  We thought we’d stop in Santa Rosalia, but just kept driving because even figuring out how to exit the main road into the town was too daunting.  We were looking for a sunny beach, and we new we’d just get mired in the town, and probably get lost.  Not to mention, Indigo was asleep as we passed through, and although he’s not a baby, we’ve learned to let sleeping boys sleep when we have the chance. 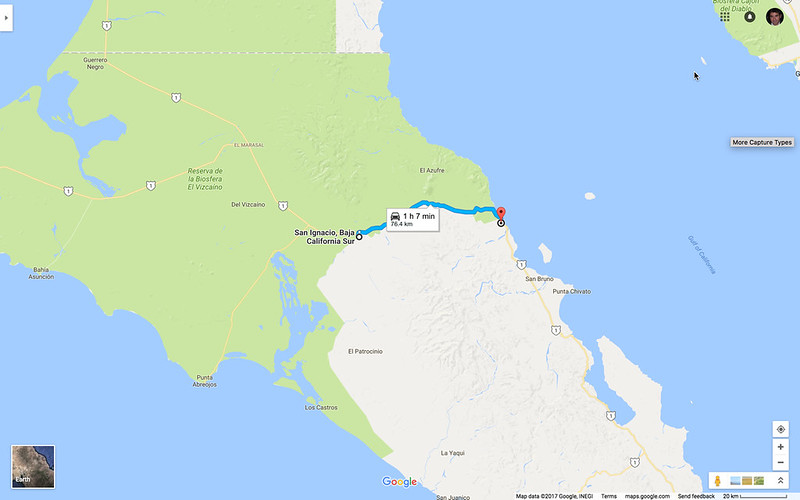 Before it got too late, we pulled off at San Lucas RV Camp and I just didn’t feel “attached” to the place.  I made Okan drive to the other two camps to the North and South of San Lucas RV Park, but I felt even less attached to those two places, so back we went. 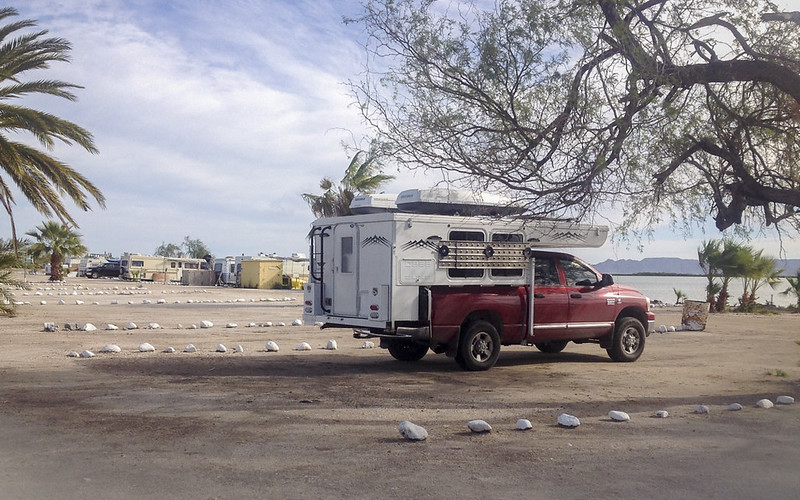 The campground is 95% Canadian snowbirds, some of which have been coming for over 10 years, some who never left to go back home.  They were a friendly group and even had twice weekly poker games.  This was a fishing spot, and most everyone had their own boat.  One gentleman offered to take Okan out the following morning because our little inflatable boat was not large enough to handle the wind and waves outside of the lagoon area.

We had sun here, but it was really windy, and the beach area was more of a muddy swamp and not that enjoyable.  After San Ignacio, it just seemed rather boring with nothing for us to do.  We only stayed a couple of days, enough to re-organize the camper and enjoy some hot showers.  Indigo prefers bubble baths over showers, and we’ve found a way to accommodate him…for now. 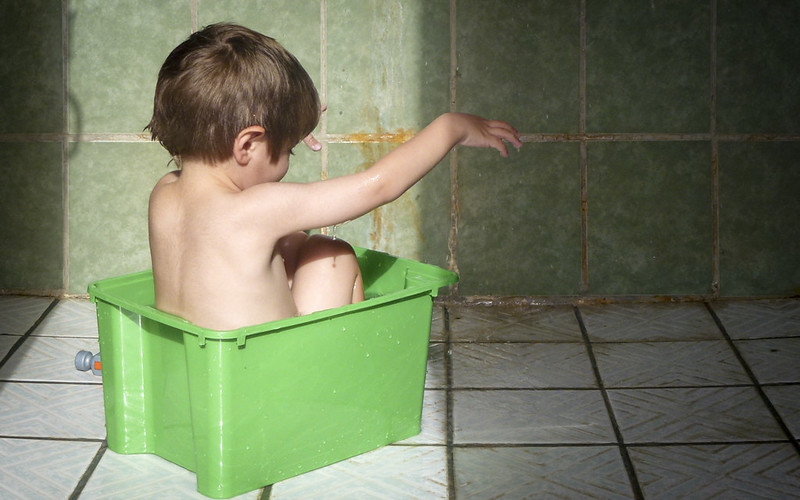